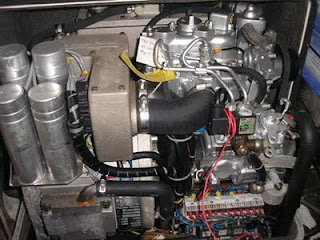 UPDATE
See below for original shut off mod.
We have in fact removed this mod. The main cause of the generator not shuting down was it has a protection circuit to protect itself should it slightly be overheated. Once you push the shut down button, it would continue to run with no load to help itself cool down before shuting down. In addition to our heat exchanger being clogged, we found some gasket material behind the sacrificial anode which bolts to the side of the generator casing seen bottom left on the photo to the above. This clogged the hose delivering water to the heat exchanger. The generator also has a high temperature shut down protection and it was after replacing the heat exchanger we had a high temperature shut down and that's when I found the additional blockage. The gasket material comes from the gasket on the end plate of the generator housing. I have a new gasket ready to replace for next season. The generator has raw water come via the RW pump and goes through the generator casing before going to the heat exchanger to pick up heat from the fresh water cooling from the engine. New Fischer Panda's have the cooling of both the generator housing, and the engine, cooled by fresh water and the sea water just passes through the heat exchanger. Due to potential corrosion I will be changing my FP next year to reflect the way FP now does it's cooling. Keep a watch out for that blog around April 2013.

Generator Shut Off Mod 2011
We have a Fischer Panda Generator  that has for some time had a shut down problem. i.e. It won't shut down from the control panel. A careful  inspection of the shutoff solenoid found no issues and the problem only presented when the unit had been running for some hours. In frustration, I used the valve at the fuel manifold to eventually have the generator shut down by starving it of fuel. However, because of the location of the valve, this would often take 5 minutes or there about. A new shut off solenoid was over $200USD and was no guarantee that it would fix the problem (it could be an electronic control module issue). Here's what I did.
I procured a fuel/gas solenoid valve off ebay for about $30USD and inserted it between the secondary fuel filter and the units own shut off solenoid. That is marked in the above photo with some red wire rapped around it. 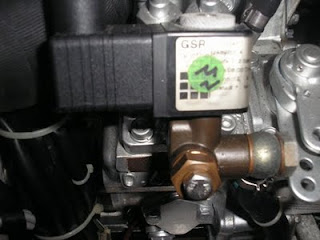 The picture to the right shows a close up picture of that shut off solenoid. 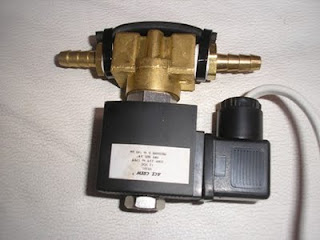 There was not much room to mount the new shut off solenoid. The whole unit is encased in a sound proof  casing. I had to find a convenient location to mount the new unit. I used an area just under the existing solenoid, with the intention that if it didn't work, I could reverse everything back to the way it was. The unit was secured with cable ties and with a strip of rubber to prevent metal to metal contact and abrasion. I had a spare switch for this solenoid on a switch panel and wired that in to activate/de-activate the unit. 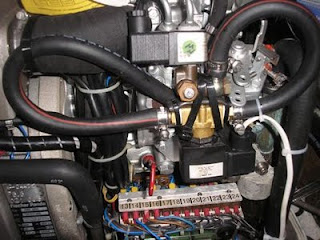 The picture to the left shows the finished installation, and while it could be a little more aesthetically pleasing, it is fully functional. ( After all, I'm in the Pacific Islands, where nothing is available to complete some projects). the generator now shuts down in less than 5 seconds when the solenoid is turned off. I suspect the OEM part is faulty  but who wants to pay over $200USD to fix that.
Cost; $30USD for the unit. Fuel hose and hose clips and wiring, I carried as spares. About 3 hours work.
Posted by Paul at 10:11 PM