Here's an interesting app for your iPhone or iPad, with downloadable charts for almost any region in the world. The app is down loadable for free from the app store and you only pay for what charts you want. The iSailor app is touted as an easy to use charting system for amateur boater. It has the basic features of a GPS navigation and charting program but comes up short of being a full featured program. It is available from Transas iSailor and here is a little introduction...

iMarine apps had this to say about it
Features: 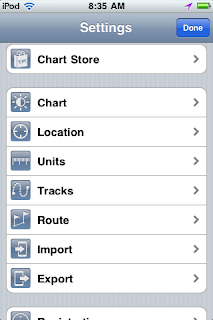 Pros:
I liked the app but there are a few things that I found lacking when compared to some of the other apps in this class.  The bright spot with iSailor are the charts.  I am impressed with the look and feel of the charts themselves. Depths are shown in gradients with different colors.  There seems to be a lot of detail with lights, wreck and points of interest both on the water and shore.

One tap to the screen brings up the soft keys which allows GPS tracking, an information feature, a measuring feature, a track recorder, routing and settings. Tapping the GPS shows the users location on the chart.  The information features brings up a overlay on top of the screen that shows latitude, longitude, course and speed. Page to the right shows just course and speed. Page right again and it shows the active route. 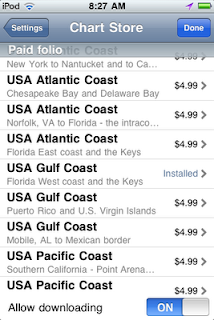 The measuring feature worked by tapping and holding the pinpoint. The indication of distance and bearing is shown on the display. Track recording is turned off and on by tapping the track soft key a REC indication let you know when the tracking is in record mode.

The routing function works by tapping and holding your finger to create a new point, continue tapping and holding to create additional points in the route. In the saved routes it also has a handy fuel consumption calculator. You can set your cruising speed and fuel consumption and it will calculate how much fuel will be consumed during that route.
Cons:
One thing that was missing was the ability to create and name a waypoints. This seems like a no brainer but maybe I am missing something here.  You can create points in a route and view those but there seems to be no way to rename them as a waypoint. It does have the ability to save and rename a route.  Within routes you can view the points but you cannot rename them.


I downloaded the app and bought a map region to give it a try. I like what I see so far but hope the authors will add additional features to build on an already slick looking app.
Posted by Paul at 9:04 PM