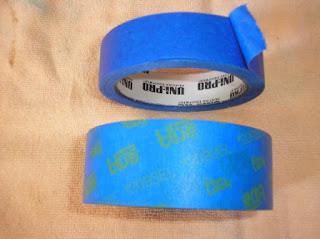 The two masking tapes shown vary quite a lot in both price and quality.
The upper most tape was from a local chandler for $6 which I had to buy on a weekend when I had run out of the other.
The lower tape was more than $16.

Which would you buy?

The top one, even while applying the tape, I could tell was going to leave "furry" edges on my paint line.
The bottom one is a 3M product #2093EL called blue scotch, and has an "Edge Lock", which leaves beautiful fine lines after the removal. I also noticed that the tape could also tolerate some sanding up to, and on the tape, without affecting the edge.
I did one coat with the cheaper tape  and then removed and my suspicions about a furry line were confirmed. I applied the better tape about 1/16 inch further out and re-sanded before painting. A rescue of a paint job that I'm sure I would have been disappointed with had I left the cheap masking tape on. What annoys me even more, is the same tape in in the USA is $8.99 retail. Why should it be $16 here in Australia (with the stronger $)? But, I always knew Australia charged like wounded bulls for everything. Unfortunately, a necessary stop off on an around the world journey.
Posted by Paul at 7:03 PM

Email ThisBlogThis!Share to TwitterShare to FacebookShare to Pinterest
Labels: Hints_Tips