Some of you may have experienced the "smelly" boat syndrome, and a lot of the time this often points to the sanitation hose which is permeating the smell, from the contents inside the hose.

Analysis and Design
When sanitation system odors end up on the wrong side of the hoses and tanks that are designed to contain them, the most frequent analysis is, “they are permeated” and a lot of the experts call for wholesale hose replacement. In fact, while this may ultimately be necessary, it’s often a case of addressing the symptom rather than the cause. If the hoses are replaced and the design is flawed, then it’s likely the new hoses will, once again, fail or permeate prematurely. (see avoiding sanitation woes)

How do you test for permeated hose? Once you have eliminated all other sources for the odour, take a flannel and soak it in hot water. Ring it out and drape over the suspect hose for a few minutes. Then take the flannel and place in a zip lock bag and take outside to fresh air. Open the zip lock bag and smell. If you smell sewage, then you hose is permeated.

Before I begin with my solution(s), I just want to recap some of the salient points for a healthy head/holding tank systems and things you should look at on your boats sanitation system. By ensuring these procedures and implementing the points below on design layout, they can greatly reduce the the permeated hose problem.


This is all in an ideal world where holding tanks are designed properly, made from the correct material, plumbed correctly and the sanitation hose is the best money can buy. It doesn't happen. For instance, the holding tank location is often decided by what space is available. This often leads to hoses being plumbed that have residual effluent sitting in the hose. Sewage allowed to sit in the hose develops acids and gas that shorten its odor-free life. This is especially the case with white vinyl extra heavy-duty sanitation hose. Good installations are short and self- draining (no kinks, loops, or dips), with tight connections. Overtight fittings and clamping can damage hose ends, causing leaks and odors. On my boat, the tank is higher than my head and the toilet has to pump up hill to the holding tank. Without extra flushing, this leads to effluent sitting in the hose. This also true of my discharge line.

To the left is a quick drawing of my head and the associated items in the sanitation circuit. There are a number of problems with my system.

So because of these poor designs in my sanitation system, effluent eventually permeates the sanitation hose and the boat becomes smelly. We all know how hard (and messy) it can be to change that sanitation hose and I have two ideas which may help with that. In addition, next time I'm at the boat, I will be changing the intake on the side of the holding tank, to the top of the tank.
First is to use barrel connectors made for alkathene (MDPE) pipe at each end of the sanitation hose. I use Hansen fittings. They may be called something different in your part of the world, but are commonly found in the farming industry and the marine industry. Our local chandler has sold these for years, but I never knew about the barrel fitting until I visited a more extensive store dedicated to Hanson fittings.

The picture to the left shows a barrel connector, which is the big nut in the middle. With one of these at each end and the sanitation hose between, one simply undoes the nut and pull the whole hose out to replace it. 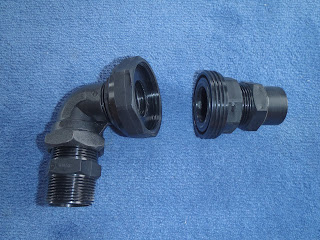 Barrel nut  in the picture to the right undone. The big nut turns and slides back to allow the male end to slide out side ways. 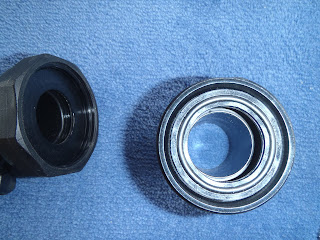 Barrel nut in picture to the left showing the "O" ring which sits across the face of the opposite side for sealing. 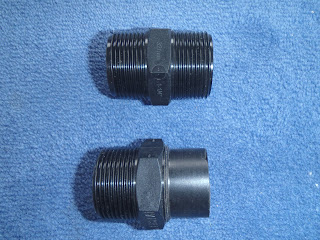 Hanson makes hose tails, but I prefer to make my own.  They are good for tight/short runs of hose, Take a 1 and 1/4 inch nipple and turn one end down to 38mm. It just takes the threads off and I find the hose is a better fit and easier to get on and off. One and a half inch sanitation hose fits really good with a hose clip. One can also use the Hanson threaded end to pipe fitting (male straight coupling), by unscrewing the locking nut and discarding it, and slide the sanitation hose on and secure with hose clamps. If using Akathene pipe as suggested below, then you slide the pipe onto the tail and screw the nut over the pipe which cinches it down onto the tail of the fitting.
An image of one is shown below. 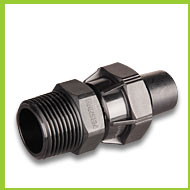 The other idea, of which I'm going to try out, is to use Alkathene (MDPE) pipe. This is a flexible pipe made from Polyethylene and I'll be using a medium density pipe. I'm trying it out because there is no info or data of anyone ever using this type of hose for boat sanitation hose. And yet it makes sense to me.This material is the same stuff that holding tanks are made from, and is used for effluent in our cities main sewer system and used by farmers for effluent discharge. While the stuff I will be using is designed for the transport of water, it is made from the same stuff the effluent MDPE pipe is, but at a size I can use. i.e. One and a half inches and one inch. (25 and 38mm)
Be aware that the pipe comes in low density and ranges through several levels to high density. It also comes in a range of sizes. The 40mm pipe and fittings are the one and a half inch  variety and in fact the inside of the pipe (ID) and  outside of the tails measure 38mm. This is the "real" size.

I'm setting this up so that, if I'm not happy with the Alkathene pipe, I can revert back to the sanitation hose without much ado. But I'm confident it will stop the permeation woes. The MDPE pipe is not as flexible as sanitation hose and if working with tight bends, you may have to use a Hanson elbow to get it around a corner. It is however, flexible , resistant to cracking, corrosion resistant  (some sanitation hose has a metal coil within the walls),chemical and abrasion resistant, excellent pressure resistance, easy to install, and more flexible than HDPE pipe. I have also used it around my farm, and it is so easy to connect, a child could do it.

While I would like the discharge line from the holding tank to come from the top of the tank, I'm going to leave it for the time being at the bottom of the tank. I'm hoping that by using MDPE pipe, which should be as good as any holding tank made from PE, then the issue of effluent in the line will not be a problem.

I also acknowledge that if you are using sanitation hose with barrel connectors each end, that they then in turn have to be connected to your devices. If your devices don't have a screw in fitting (like most PE holding tanks do),and has hose tails only, then one is faced with extra hose and hose clamps at each end. I think this is worth the extra "risk", and if the hose tail off the barrel connector is kept close to (<1/8 inch) from your device hose tail, then permeation at those points would be minimal.

Another change which I will also be doing is to put a barrel nut either side of the macerator pump, so that it is easy to take out should I need to work on it. It's in a tight location at the moment and difficult to get at the pump. These barrel nuts will make taking out the pump so much easier. I already have one on the discharge side of the macerator pump with a non return valve ( a joker valve, by which I machined  the barrel coupling to take), and a shut off valve so that if taking the pump out, I don't get a back flow from the hose leading up to the intake of the holding tank.

Below are some photo's showing the ease of the barrel nut disconnect, using both sanitation hose (in white) and Alkathene (MDPE) pipe in black. 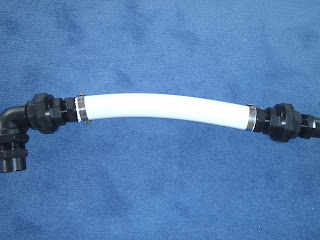 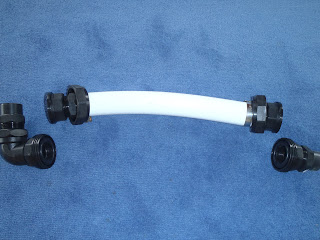 You can place the nut of the barrel nut so that either stays on the removed hose section, or stays at the appliance fitting end. 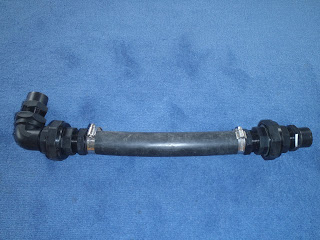 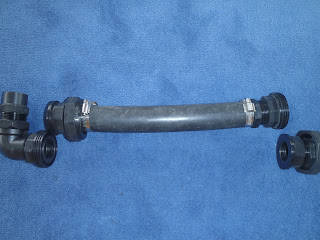 Hope this will help for your next change of your sanitation hose. Below are some links that I thought might help.

Here is a list of Hanson couplings.
A comparison of Trident Sanitation hose.
Here is some instructions for installing sanitation hose.
Need a custom made holding tank. In our city one of the plastic tank manufacturers will make custom tanks on any shape you give them. It seems Raritan also does this. Check out your local area; there may be someone who makes PE tanks.