With this post, I want to advise readers that to do as I have done will probably void your warranty. However, if you are out of warranty, then this is a possible solution. Normally to replace the end bearing would require the complete removal of the engine from the case. Here's how I did it.

I discovered that my generator end bearing was making a noise and looking at the end plate, discovered some over heating signs. Time to replace the bearing!

You can see here to the left, the photo shows overheating at the center of the alternator end plate. The brown color is burnt grease which has escaped the bearing. Actually the photo is the completed job before the sound case was put back . However, the "burnt" sign were still visible.

The first thing I did was remove the centre bearing support, on the alternator end plate.


This required three screws to be removed and longer screws with the same thread placed into three threaded holes on the end plate. By tightening these longer bolts, they pushed the center plate out. You can see three threaded holes in the picture to the right, and three scuff marks where the three extraction bolts pushed up against the end plate to help drive out the center piece.

I modified a puller to fit in the space available, to try to extract the bearing. In the end, so much force was applied, that a foot on one of the legs of the puller broke off.   Soooo, time to remove the end plate and put a heavy bearing puller on it. You can see the sealed bearing has lost it's ability to hold it's own grease.

The end plate was removed, and I tried another very heavy duty bearing puller, to no avail.

There are many methods by which you can get  a "stuck" bearing off it's shaft, but the most popular method seems to be with a Dremel with a cutting wheel, to cut the bearing off the shaft. Usually you cut through the bearing "almost" through it's thickness, and drive with a hammer , a cold chisel into the cut, to help fracture the bearing, and then it is usually easily removed with a couple of screwdrivers. It helps if you make two cuts with the dremel. The first cut weakens the bearing inner race and the second (at 180 degrees to the first) allowes you to 'fracture' the inner race on the shaft.

The outer shell of the bearing and the ball race were very easy to cut off. The inner race was placed next to a shoulder on the shaft, so I couldn't get the dremel saw all the way across. So, I turned it 90 degrees and cut down as far as I dared; starting near the shoulder and working back. It was  tedious, but did a slightly better job than using a grinding stone.

After the old bearing was removed, the surface was cleaned up with a sanding wheel using the dremel again. The new bearing was driven onto to the shaft using a drift punch against the inner shell, ensuring it went on square, and knocking alternatively, from side to side.

Now it was time to clean up the surface of both the end plate and alternator casing, for the new casket. However, I found Fischer Panda had epoxied the ends of the water jacket in the casing; placing first a thick gasket like cut out, inside the water jacket, and then the epoxy to the end of the water jacket.

I found one water jacket with nothing in it, but the remains of the epoxy. I proceeded to clean all the water jacket ends and release the epoxy "bungs".

Previous to this job, I had removed my sacrificial anode and found two of the gasket cutouts blocking the water hoses that are involved with the cooling. I wondered where they had come from, and Fischer Panda advised they were from the end plate gasket. Rubbish, The gasket was complete! Now I know. I've also found in the past, some of this epoxy in my heat exchanger. No wonder I've had over heating problems in the past.

Now in cleaning up this epoxy, I found a number of the cut outs had migrated into the water jacket. Lucky I have a special took for grabbing stuff in tight places. 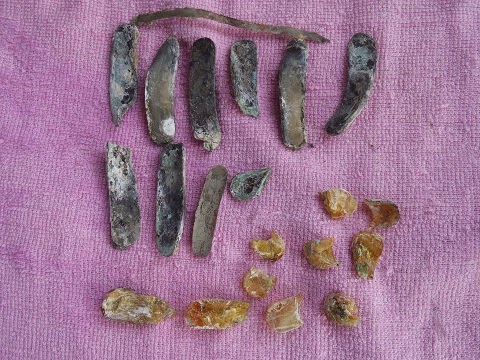 To the left, some of the cutouts and epoxy removed. The smaller bits were not saved


After cleaning out all the water jackets, I had to build up some areas. The areas of concern were soft aluminum and I used a dremel burr to clean away the soft stuff. Pretty much like a dentist might clean out tooth decay. Because I was not in a position to now order a whole new generator casing, I decided to do a patch job and hope this will last another year, until I can either get the new parts, or a new generator altogether. All the corrosion was at the end of the generator casing, and I suspect the epoxy had some part to play in this. My theory is that when the generator casing was raw water cooled, that the epoxy "traped" sea water and prevented an exchange of clean water, when I did a fresh water flush at the end of each generator run. 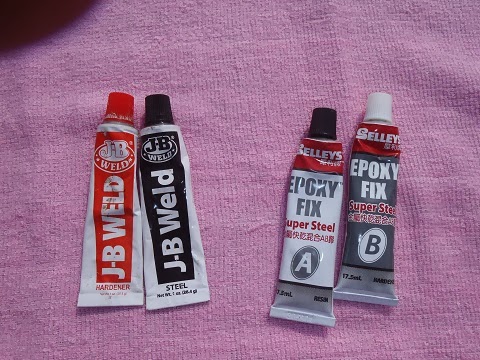 I used J-B Weld to build up the "decayed areas", after ensuring the surface for the epoxy was clean and free of dust and "soft" aluminum.
J-B Weld takes about 4 hours to set and 24 to really harden. Selley's also has a similar product, but it sets in 3-5 minutes according to the directions. However, after trying it on another item, I found I only had about 1 minute of working time. I preferred the longer working time, although I often waited 20 minutes before applying J-B Weld to the surface.

The end of the casing, after the J-B Weld had hardened over night, was leveled with a dremel and fine burr, and checked with a straight edge. 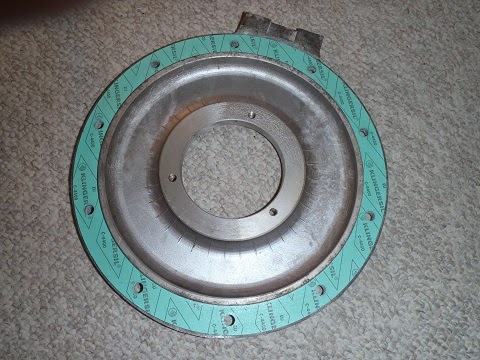 Finally, after all surfaces were cleaned and checked for "Flatness", I used the supplied gasket and applied a thin layer of RTV high temperature gasket cement to both sides of the gasket. All studs were also given a coat of "antiseize" before the plate and nuts were applied. A gentle tap around the outer surface was required because of the shoulder that recesses into the casing. This can be seen in the inside of the gasket to the right.
The nuts were finger tighened, and the RTV allowed an hour to set up. Then final tightening done after the RTV cement had set up.
Engine mounts were applied and the capcitors and air intake module replaced. These were removed to facilitate the job and obtain exposure.
The small piece of generator casing cut out so that I could cut the engine mount in half was placed back with a small piece of aluminum plate, pop riveted to the fibreglass cutout, and screwed to the remaining sound proof case.
The engine and generator case were then filled with fresh water and antifreeze and bleed of all air. This took some time before the correct flow of water was to be had.

I feel that if I had of changed my generator casing to fresh water cooling sooner, that maybe this "corrosion" might not have happened. Regardless, while it was sea water cooled, the anode never deteriorated from it's new condition and feel FP's anode let me down. You can read about how I changed the water cooling here, so that both the generator casing and the engine, enjoyed fresh water only and heat exchanged through a heat exchanger.

Now it's a question of will this repair last a year until I can do a complete alternator casing changeout, and also, do we repair or install new? We have done four hours on the generator, and so far no problems.