A Quick an Easy Way to Do Your Own Rigging

Most sail boat owners at some time or another are faced with having to have their standing rigging replaced. For some, it's a question of can I do this myself. One of the inventions which has potentially made this possible is swageless fittings, However, even some of them require some skill, as most require unraveling the outer wire strands and getting them evenly spaced before the final assembly. You can see the Norseman fitting in the middle of this blog to compare with Suncor fittings. To me, the Norseman seems way more "fiddly" to assemble. To help you make an informed choice here is what Bosun Supplies had to say with their test of Suncor fittings.

It was said that after having rerigged my boat I was not sure it had been cost-effective to do it myself. I reasoned that, between the cost of the tools I bought and the cost of the swageless fitting I ruined (by getting a wire pinched between the upper and lower terminal and stripping the threads), I was close to the cost of having the job done by a professional rigger.
That opinion was based, to a large extent, on how time-consuming and difficult it was to assemble the swageless fittings I used.
Recently, I was  asked to evaluate another fitting manufactured by a Danish company called Blue Wave. I wasn’t aware of this fitting when I rerigged my boat. The new fitting promised to be much easier to use. So easy, in fact, that I had reservations about its ability to match the full strength of the wire.
Suncor Stainless is the sole importer of this part and collaborated on its engineering and development. They supplied a sample fitting and a length of 3/16-inch stainless-steel wire. The fitting looked first class. In fact, it appeared to be the most robust casting of all the swageless fittings on the market. It was easy to install because the wire does not have to be unlaid. There is no cone to be inserted, and there is no bending of the wire over the cone. Total assembly time was under one minute. Very impressive. But was it strong enough? 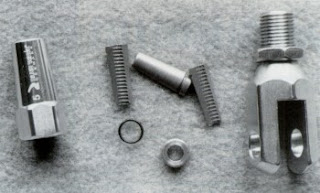 To conduct a fair test, I purchased a length of 3/16-inch, 316 stainless-steel, 1 x 19 rigging wire sufficient for several tests. I could cut the wire into pieces for each sample test. Each section of wire, therefore, would be the same. I also obtained equivalent-sized fittings from two other manufacturers who supply swageless fittings. The variable would be the fittings.
In a test of this type of assembly, it’s expected that the wire will be the part that fails. It is also expected that the terminal will not weaken the wire where it’s attached to the terminal. The wire used in the test has a breaking strength of 4,000 pounds, so that was the ultimate test goal.


Overkill
Quality Testing Inc., has all the required equipment, fully certified, to pull a load of up to 120,000 pounds of force on a sample. A little overkill for my needs, perhaps, but they agreed to do the tests.
One problem we discussed was how to secure the standing part of the wire so we did not pointload one small section of wire. The solution was to build a loop in the wire with two Nicopress compression fittings and a stainless-steel wire clamp backup. A three-inch, heavy-wall piece of pipe was slid through the loop and formed the top secure point of the standing part of the wire.
To secure the fitting to the test stand, we machined a piece of steel plate with a hole in it to receive the pin of the fork from the fitting. I had to make up a swage fitting on another section of the same wire so we could test it, along with the other two fittings, as a part of the baseline.
The fittings were ready, and the lab was all set. The first fitting to be tested was the "baseline" swage fitting. One of the functions of the test machine is to monitor and record the loads as they are applied to the test specimen. If you look at the first graph (Test 1), you will see that the swage fitting held onto the wire to a peak load of 4,112 pounds before slipping. The wire did not break; it pulled out of the fitting. This was a successful test as the wire breaking strength was rated at 4,000 pounds, and the fitting exceeded that load. The other two fittings were tested to verify the baseline. One test was satisfactory, and one tested well below the braking strength of the wire (This terminal brand was retested at a later time with an assembly made up by the supplier. It also failed the second test.)

Held the Load
The new Suncor fitting was next in line. The graph (Test 4) for fitting number four shows that the Suncor fitting held the load all the way to 4,278 pounds, 166 pounds higher than the swage fitting. This assembly also successfully passed the test. Not only that, but the outer strands of the wire actually broke, leaving the inner core of the wire attached to the fitting. I do not think the inner core would support too much load, but it did stay together. This was true of one other type of swageless fitting we tested as part of establishing the baseline. 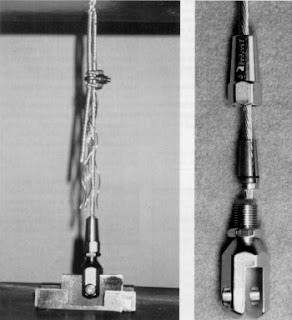 The Suncor fittings have some qualifiers that must be observed. They should be used only with the specific size of wire for which they are made – and they are not made for all sizes of wire. The 9/32-inch Dyform wire on my boat does not have a corresponding fitting from Suncor. The closest is 5/16-inch, so I could not have used these fitting with the wire I chose. It is imperative that the directions be followed carefully as to the length of wire to protrude above the inner wedge and pressure ring. Other than that, the fitting is easy to use and has proven itself under a verified load.

What does all this mean? -by Jerry Powlas

When asked to evaluate the Suncor terminal we half expected him to say, "It’s too easy to be true." He could simply have presumed that these things worked as claimed, but he’s a cynic. He has had his share of surprises with rigging terminals. So he ran tests.

To provide a proper baseline for the test, he tested the two other swageless terminals he knew of, Norseman and Sta-Lok, as well as a C. Sherman Johnson Co. swaged terminal, with the swaged wire assembly professionally made.

There are very narrow limits to what can be inferred from testing only one sample assembly of each terminal (or in the one case, two samples). Many samples of each terminal would need to be tested to make definitive statements about the performance of these parts. At nearly $100 a test sample, we were not inclined to do that, although we hope the manufacturers of these critical parts are no inclined.

Not significant
Respecting these narrow limits, it should be said that the differences in the ultimate breaking strength of these assemblies (the highest load before failure) are not significant in the case of the three assemblies that had ultimate strengths higher than the wire rating. If the terminal functions properly, the test becomes a test of the breaking strength of the wire, not the terminal. This is true even in cases where the wire deforms and pulls out of the terminal without breaking.

In the cases of the two Norseman terminal-and-wire assemblies that failed to reach the breaking strength of the wire, many explanations are possible. Without more evidence (more testing to achieve statistical significance and professional engineering evaluation of the failures), it is not fair to speculate.

One of the appeals of swageless terminals is that they do not require a (very expensive) swaging machine, so they allow the boatowner the opportunity to do this job personally. If spare wire and terminals are carried, it’s even possible for the owner to make repairs in remote ports, or in a worst case, at sea.

There are many critical attributes to a swageless rigging terminal. It must be consistently strong, corrosion-resistant, and affordable. If it’s to be offered for use by amateurs, it must also be easy to use, so that the liklihood of proper and satisfactory assembly is extremely high. We tested only a few samples, so our opinion must be tentative, but this evaluation certainly suggests that the Suncor terminal is extremely easy to use. Bill considered the Sta-Lok terminal easier to use than the Norseman terminal. In at least some instances, the Norseman terminals may not be able to allow the full strength of the wire to be utilized.
Posted by Paul at 9:39 PM

Email ThisBlogThis!Share to TwitterShare to FacebookShare to Pinterest
Labels: rigging