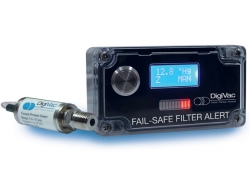 A Filter alert system from Digivac gives advance warning of the need to change your fuel filters to prevent problems.
Their Brochure in PDF format can be found here
Compare it to a simpler product shown here on my blog earlier. Manual verses electronic.
Here's what Digi Vac had to say.....

This is a very simple breakthrough approach to avoid engine failure due to clogged fuel filters.  The Fail-Safe Filter Alert system notifies the operator of a fuel filter getting clogged.  The System uses a water proof display and a waterproof robust sensor mounted directly on the fuel filter with a clear character display, descriptive lights and a loud alarm so you can be sure what the system is telling you.  One of the worst fears of any boater is losing an engine during inclement weather, especially when making landfall in inclement or difficult conditions such as a narrow rock lined inlet.  Any engine failure could mean an unhappy boating experience and potentially the loss of the boat.  This system is one way to avoid the common causes of engine failure by monitoring fuel filter health.

Why use the DigiVac Fail-Safe Filter Alert System?

How does the The DigiVac Fail-Safe Filter Alert System Work?
The DigiVac Fail-Safe Filter Alert System works on the principal of maintaining fuel flow.  In a healthy fuel system, the engine low pressure pump will pull fuel from the tank through a filter.  As the filter does its job and collects contaminants, the filter flow is reduced.  As the flow is reduced, the lift pump has to work harder to pull fuel to the engine.  There is a point where the filter is too clogged to support the flow necessary for the running of the engine.  When there is not enough fuel flow, the engine first loses power then stops.  Unfortunately, a filter is very likely to clog in precisely the kind of situation when you need a reliable running engine the most.  When rough seas toss the boat, they also mix-up the contents of the fuel tank, and more contaminants are likely to find their way to the fuel filter resulting in engine degredation and failure.
How is the DigiVac Fail-Safe Filter Alert System Different?
Before this solution, one of the only ways to get the filter pressure levels to the cockpit involved extending the very sensitive closed diesel fuel system 10-50 feet.  Extending the fuel system up to the cockpit can add significant risk to the fuel system through increased likelihood of air leaks that could cause an engine failure.  Additionally, it would require the operator to constantly monitor the gauge.   The DigiVac 500 adds close to zero risk of any air intruding the system since it replaces the T-Handle (which comes standard with Racor 500, 900 and 1000) with a a stainless steel double walled hermetically sealed sensor.  Even if the sensor fails, the fuel system will not be exposed to air.  Additionally, the DigiVac Fail-Safe Filter Alert has multiple visual indications and a loud siren to notify of a dirty filter that could stop the engine.

The DigiVac model 500 not only gives a remote indication, but also shows a trend of a filter getting clogged.  Healthy systems show up as “all green”, marginal systems show up as “all yellow” and systems that are in danger of starving the engine are “in the red” and a loud auditory sound would be activated.  Before the model 500, an operator would have to choose a filter replacement interval that would keep the engine running, and frequently visually inspect the engine and filter for debris in the fuel bowls as an indication that the filters may be marginal.  The Fail-Safe alert allows the operator to constantly monitor the filter status while at the helm, and while the engines are powering.
The DigiVac Model 500 Fail-Safe Filter Alert enables the operator to have one additional key input to the engine's health and allows the operator to focus on other critical safety factors instead of fear that the next rough see kicks up enough muck to stops the  boat in a crowded sea way.
Posted by Paul at 12:59 PM