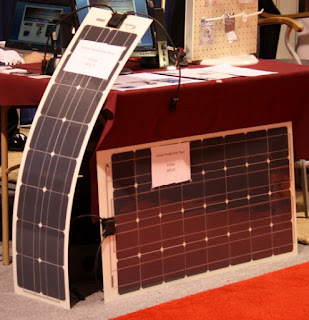 Three Sheets Northwest had this to say about some new solar panels.

One of the more interesting products we saw at the Seattle Boat Show was the flexible, super-thin, lightweight solar panels made by Italian company Solbian.
The Solbianflex Solar Panels, which were at the show for the first time this year, are about as thin as a flexible cutting board and weigh between 1.76 and 5.17 pounds, a fraction of the weight of the bulky, heavy panels typically seen on boats.
But what intrigued me the most is that the panels can be ordered with zippers that attach to biminis and dodgers, making for easy installation without the need for heavy, expensive mounting frames. The panels can also be mounted with grommets and lashed down on decks, though situating them in high-traffic areas is not recommended.
The high-power versions of the panels are advertised as the lightest and highest output solar panels on the market, with a reported 22.5 percent efficiency — meaning they convert that much energy in sunlight into electricity.
Solbian began making the panels a few years ago and designed them as a lightweight, rugged option for offshore racing, Schwab said. They cost more than conventional solar panels, ranging from $400 to $1,175 depending on size and energy output, but Schwab said the cost is more than offset by the savings on mounting equipment.
The product’s West Coast distributor, Ed Foster, said he sold more than half a dozen of the panels during the Seattle show.
Pricing etc can be seen here from  Bruce Schwab rigging services

Email ThisBlogThis!Share to TwitterShare to FacebookShare to Pinterest
Labels: solar