A Lesson in Troubleshooting 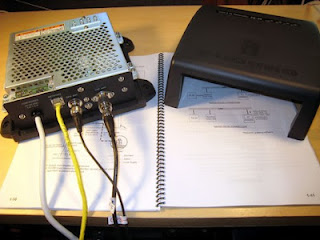 I'm writing this up after almost a year after the incident. I never wrote it up originally because I was some what embarrassed about it all, but after reading an article by sail-delmarva, I have thought it my be of use to some of you "troubleshooters" out there.

Last year we installed a class "B" AIS transponder and after some issues with it not working, we left Picton, New Zealand and eventually made Fiji. The unit worked fine and we loved seeing the targets on our MFD. (Furuno AIS and Furuno MFD). The original reason it didn't work was because the unit was set to "USA" instead of "International". Something to do with the frequencies AIS works on.  I checked the installers manual and all the frequencies are the same, except for about two. I couldn't understand why that setting made a difference, but it did. Perhaps somebody out there can tell me why.

Anyway, in Fiji, I noticed we were no longer picking up ships which should be displaying as an AIS target on our MFD. So, I check the AIS unit and notice the power light is now flashing green and none of the other LED's were on. I said to my wife, "I'm sure that Green LED used to be a solid Green".
I checked the manual and couldn't find anything about a flashing Green power light, but figured that with the other LED's not lighting up there was something wrong with the unit. I also hooked up my computer to it, because it has a self test, and you can change the settings with the computer, but was unable to get a connection.

So, as per sail-delmarva suggestions in "Lessons in Electrical Troubleshooting", I took out my multimeter and checked the voltage supply. The batteries were a little down but I showed 13.2 volts. Almost the same as what was showing on my house bank monitor.

My wife was making a quick trip back to New Zealand (by plane), so I had her take the whole unit back to Auckland NZ for a test etc. To my surprise, I get a phone call from NZ to say the unit tests out OK. Fine, bring the unit back.

Now this is where it gets interesting. Sail-Delmarva says

I reinstall the unit, and that dammed light is just flashing back at me again. Damm! I check the voltage again. 13.4 volts. What could be wrong?

I  take the unit out and now hook it straight to the battery. Yes, it works!!!
Put it back in place  and the light is flashing again. Voltage fine. Hmmmmmm
Check circuit breaker voltage. Fine. BUT now I have a little alarm go off in my head.

The issue was, when I had installed the the AIS, I put it to one of the remaining circuit breakers that was not in use. This was of course, the faulty one, and unknowing to myself at the time, set myself up.

So, my lesson is, if at first everything checks out fine with the multimeter, try hooking the device straight to battery to see if it works. It seems the electronics of today are getting so much smarter and can detect issues on an electrical supply and turn themselves off to protect their circuits.

They do say " a stitch in time saves nine". I should have replaced that circuit breaker at the time of the fault, or put a note on it.
Posted by Paul at 3:10 PM

Email ThisBlogThis!Share to TwitterShare to FacebookShare to Pinterest
Labels: Hints_Tips