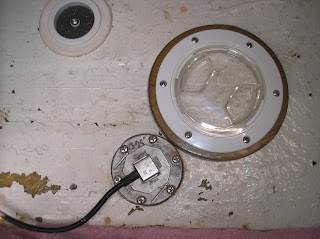 I have a holding tank gauge with sender unit for some years now, but have never enjoyed removing the tank sender unit for a clean from time to time. Even when the unit is especially designed for black water, it would eventually clog up and need to be cleaned. My aft holding tank was easily accessible, so I decided to put a view port in so as to "see" the level of the tank. You can view the old sender unit here at WEMAUSA. It is the one on the right.
First, I had to design my window and decided for simplicity sake, to use a beckson hatch with a clear screw lid. These have a "O" rind for sealing. To this I mounted it on a half inch piece of ply cut to shape and given 3-4 coats of clear epoxy. Screws were mounted so as not to protrude through the other side. I also didn't want screws to go through into the holding tank and the mounting wooden plate adds some stiffness to the tank. Why wood instead of GRP? I like the idea of being able to reverse anything I do and the wooden base plate would (no pun intended) be easier to cut off. 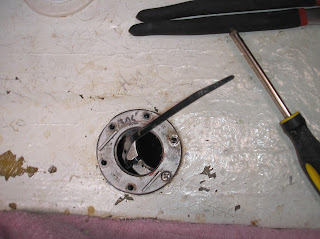 After removing the sender unit, which was now showing signs of corrosion, I had to remove the screw in adaptor. This had a "C" shaped backing plate, so I lassoed it with a cable tie before undoing the last screw which held it there. I was then able to remove the backing plate with some ease. 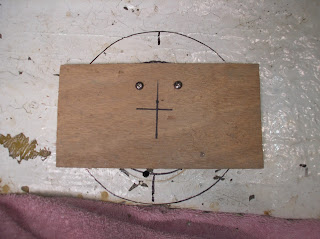 I marked out the location of the new base plate, takeing out the old hole. But it was somewhat off centre, so to help with the hole saw, I screwed on a scape piece of wood and held it in place with screws through the piece of GRP that was going to be discarded. 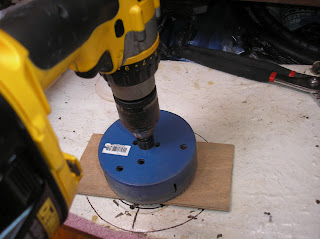 To the right you can see how easy it is to drill a new hole where an old hole already exists. 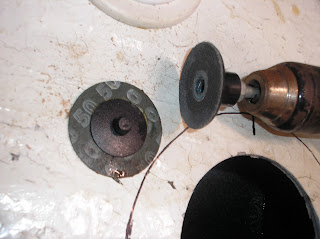 Next, I sanded the paint off with a Rolok sanding disk. 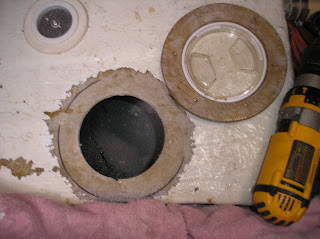 The back of the backing plate was also sanded. Then I mixed up some epoxy with a silica type "Glue" additive to give a peanut butter viscosity. This was applied to the tank and then the backing plate pressed into the mix. Some squeezed out to the inside and I was able to get this before it fell into the tank. (wearing rubber gloves). The out side was smooth filleted with just a finger and left to harden overnight. 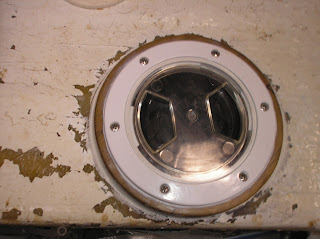 Finally the beckson hatch was bedded with 3M 4200 to the base plate.
And the finished inspection/view hatch to the left. It helps to shine a small flashlight up to one side of the clear hatch to get a better view of the level. Plus, now if I want to, I can put a hose in the tank to give it a wash out from time to time.
Posted by Paul at 12:27 AM