A lot of you out there will know of the frustration when your paddle wheel gets clogged, and fails to work. Pulling the thing out (if it is a thru-hull) to clean is not only a chore, but can let in a bit of sea water.
I have an Airmar DST800 (Depth, Speed, Temperature)  which I bought around 2005. It was for Raymarine ST60 instruments and did the job fairly well. When removing the transducer, I get an ingress of water because it does not have a self closing  valve which would close as the transducer is removed. I believe (I have been told, correctly or incorrectly) this is still the case for the Raymarine  DST800; and yet most of the other transducers of this model (post 2005) have the self closing valve. See their brochure here for the DST800. I was told the transducers were changed after 2005  so that they have the self closing valve, BUT not the Raymarine version. A little research was required.

My instuments (ST60 Tridata) work by taking an analog signal input from the transducer. My ST60 will only display seatalk input if changed to a repeater display. It will not display nmea 0183 or 2000 data, UNLESS one can convert that data back to seatalk (1)

My choices after some contemplation were
1. Stay as I am
2. Change to a new DST800  with nmea 0183 output,  and get a nmea 0183 to Raymarine
converter so I can have the self closing valve.
3. Purchase a new DST900-EM which has no paddle wheel and picks up speed by electromagnetic induction, also with a self closing valve

Considering those choices, here are the problems.

Notwithstanding that statement, I'm sure they will be released soon and have included here a little of what Airmar has to say about the product. For those with nmea 2000, a great choice when it is released!

Airmar’s NEW DST900-EM is the industries first all-in-one depth, speed, and temperature sensor with no moving parts. The NEW innovative speed sensor circuitry creates a magnetic field in the water. Speed is accurately measured by the voltage created through


conductive properties of water, combined with the forward motion of a vessel. With no moving parts, the DST900-EM is capable of accurate readings at all vessel speeds. What sets the DST900-EM apart from the traditional speed paddlewheel is the excellent


accuracy at very low-speeds between 0.5 and 5 knots (0.6 and 6 MPH)—an important feature for sailboat racing. The DST900-EM’s accuracy at high-speeds up to 50 knots (57 MPH) makes it an important sensor for powerboats. By eliminating the traditional paddlewheel, there is no fouling, and drag is reduced to a minimum of 6.3 mm (0.25”) below the hull due to the low-profile housing.
Rated at 100 W power, the 235 kHz depth transducer provides depth readings in as little as 0.45 m (1.4’) of water and can reach depths up to 180 m (600’). The narrow-beam of this transducer will
deliver accurate depth readings at speeds over 35 knots (40 MPH).
Additionally, the 235 kHz frequency prevents mutual interference with other echosounders on the vessel.
The DST900-EM’s fast-response water temperature sensor provides ±0.2°C (±0.1°F) of accuracy to help in finding the optimum conditions for fishing or swimming. Airmar’s patented housing design incorporates the popular self-closing valve. When the transducer is removed for cleaning, the valve minimizes water flow
into the boat.
The lightning-fast processor inside the DST900-EM makes calculations every second, so it can respond quickly to changes in speed, depth, and temperature. This data is then sent to the NMEA 2000®network via a single devicenet cable for an easy plug-and-play installation.

But recent enquires put a different light on the question of legacy formats. A recent email had this to say...  "The DST900 most likely will have the self closing valve. The DST900 will be capable of outputting Analog, NMEA 0183 and NMEA 2000 so it should cover all your needs including working with the ST60.

At this point we still do not know when it will be released."
So if I wait long enough, maybe this will be my solution of choice. Sometimes this is called vapor ware.

So, I'm no closer to solving the paddle wheel "blues". However....

Here's another solution. Don't have a transducer at all!!
This solution by Cruzpro here is great if you don't mind SOG instead of STW .

The CruzPro SOG1 takes NMEA 0183 data from a GPS and creates an analog paddlewheel signal so you can display Speed Over the Ground (SOG) on a standard speed log without a transducer. 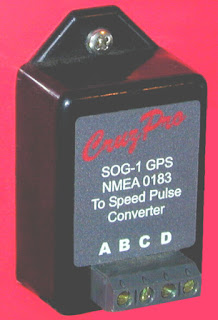 The SOG1 creates an analog paddlewheel output signal from a GPS NMEA 0183 $GPRMC sentence so you can display Speed Over the Ground (SOG) on a standard analog or digital speed log.

The SOG1 replaces a thru-hull or transom mount paddlewheel speed transducer and provides Speed Over the Ground in place of Speed Through the Water.
No more cleaning of paddlewheels to remove marine growth or weeds.
Provides a more accurate estimate of time to get to your destination since it is not affected by water currents and provides a resolution of 0.01 knots from 0.00 to 60.00 knots.
The SOG1 is powered by 12VDC and draws less than 0.020 amps.

NOW,
Back to to Airmar's current selection; Thinking that the new DST800(V) isn't available for Raymarine instruments, I came across the following info in this Newsletter. It appears that perhaps they do have a new DST800 that will do the ST60 instruments AND the self closing valve. Read below their blurb....

The DST800 Retractable TRIDUCER® Multisensor is now available with
a VALVE
The industry’s only depth, speed and temperature retractable transducer is
now available with a valve! The DST800V meets customer demand for our
patented valve assembly that prevents water from rushing into the hull when
the insert is removed. And the addition of a valve lets boaters service the new
DST800V while the vessel is in the water, saving time and money!
Offered in NMEA 2000®, NMEA 0183 or Analog versions, the new DST800V simplifies any
installation by delivering three readings while having only one hole drilled in the bottom of the
boat. These three important readings can then be displayed on instruments, echosounders,
NMEA repeaters or Network navigation systems.
The new DST800V includes:
• Airmar’s patented self-closing valve assembly.
• Two O-rings, one at the top and one at the bottom for a water-tight seal.
• Industry standard 2” thru-hull hole size.
• NMEA 2000®, NMEA 0183 or Analog versions available.
Although the new DST800V contains Airmar's popular TRIDUCER® insert, the original DST800inserts cannot be retrofitted into the new housing with a valve. This is because all DST800 insertsmanufactured prior to November 2005 have ribs and an alignment key. If an older style insert withribs is pushed into the new P617 housing (which contains a valve), the insert will damage thevalve assembly.
However, all DST800s manufactured after November 2005, do not have ribs or an alignment keyon the insert. These can be retrofitted into existing installations that have a plastic P17, bronzeB17 or stainless steel SS577 housing. To insure proper sealing when installing a DST800 in aP17, B17 or SS577 housing, the yellow O-ring at the top must be replaced with a black O-ring.

Sooooo; my choices now are, I can wait for the NO paddle wheel DST900 and change out (choosing the analog version). Change to the upgraded DST800 (with self closing valve) but have to pull it out occasionally to clean the paddle wheel ( but not suffer the ingress of water due to a self closing valve), or go no transducer and loose the depth and water temperature in the process. Hmmmm, I think I will just sit and wait another year!
What would you do?

Email ThisBlogThis!Share to TwitterShare to FacebookShare to Pinterest
Labels: electronics