In cruising, you travel from country to counrty where environmental laws are increasingly becoming more strict. But we all want to look after the environment, right? Fuel spills are a serious mater and there are various ways to minimize these. Also, when under way, one sometimes has to top off the fuel tanks from Gerry jugs. This is made all the more harder if one has to do this on deck with rain or sea water washing over the deck.
(In one passage we carried 17, five gallon Gerry Jugs as well as our full 100 gallon tankage. We used all but 25 gallons in that passage in which we also endured a BIG storm. This system helped to do fuel transfer much easier, when being on deck was life threatening) 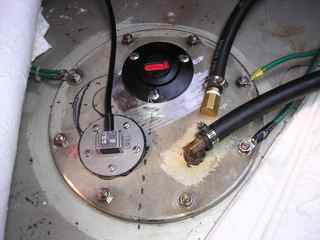 We installed, on each fuel tank, a filler cap, and while we were at it, installed a sender unit for fuel gauges. These were purchased through WEMA , a company that supplies sender units. As an aside, we also installed one of their special sender units on a holding tank; but have to report I'm less than happy with it due to it having to be cleaned periodically. A task I don't enjoy. But the Fuel sender units have been flawless and I can recommend them. 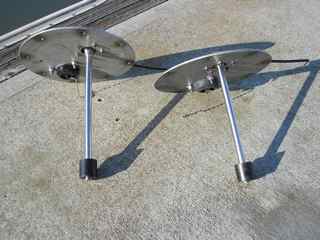 To cut the holes for the fittings, we used a regular hole saw found at most hardware stores, using some cutting fluid to help preserve the hole saw. I think we got about 5 holes cut before I had to purchase a new hole saw, which was cheaper than getting them plasma cut. Each item was sealed with an RTV automotive cement which formed the gasket and was impervious to diesel.
Now, I fuel the tanks from inside the boat to minimise the potential for a fuel spill into the ocean. The same applies with filling from gerry jugs. And of course, I have a very quick way now of checking how much fuel I have without the need to "dip" the tanks. A task which requires getting under the floor boards if done.
Posted by Paul at 4:19 PM