For most people traveling in "well to do cruising shores", usually have the means to obtain spares quickly. There are some areas though where spares are hard to get, or if freighted in, present customs difficulties; let alone the cost of it all. So, most cruisers carry what they think they will need. We thought we had most areas covered, but when we arrived in Fiji, we had three of our four heat exchangers go bad in less than one month. The transmission heat exchanger had small pin holes which leaked sea water. This was easily fixed with some solder. The main engine heat exchanger presented itself to my wife and I, by us noticing we were loosing engine fresh water from the "small top off tank". We suspected the fresh water was being lost through a hole inside the heat exchanger to the seawater side. Fortunately I had a spare main engine heat exchanger and replaced it out. The old one was sent for cleaning and testing and our suspicions were confirmed by the engineering firm. A small leak inside the heat exchanger.
(BTY, we hunted for a heat exchanger of any kind and could not find one in Fiji. We knew there would be some place that had one, but we felt we were chasing our "tails". So we went to plan "B". Get one where we know we can source one. Read below.)
The last heat exchanger was on the generator. A Fischer Panda (FP). 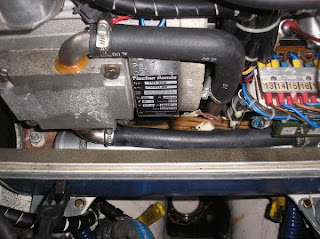 You will notice the round heat exchanger, under the motor and bottom hose. Just looking at it, I figured that it is going to be one hell of a job to get that out. We reversed flushed the heat exchanger, and got out a handful of particular matter. Inquiries, told us that this stuff actually "grows" inside and even though we fresh water flush the generator after each use, (flushing out the seawater from the heat exchanger) this wasn't enough to prevent stuff growing and blocking the tubes inside the heat exchanger. The flush worked for a while and the generator ran for some weeks, before it started to over heat again.
So, leaving the FP heat exchanger where it was, and removal for a time when we are in a better location, I decided to install another heat exchanger, out side the casing, and one which I could easily get to the hoses and heat exchanger itself. My wife was making a quick trip back to New Zealand, so I had her procure through contacts, a heat exchanger. This was modified with the appropriate hose tail size to fit the hoses used on the FP. I was very lucky to have someone help me with this while I sat in Fiji. Needless to say communication was a major factor in getting this done. Many thanks to Charles Webster.
When, the unit arrived, I set about modifing the cooling system for the new heat exchanger. 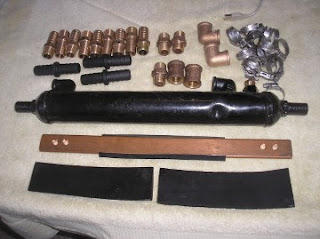 The parts, were carefully checked to make sure I had everything. The 19mm radiator hose is not shown in the picture but I had 4 metres of the hose.
The fresh water and raw water side of the FP heat exchanger were identified  and the existing hoses removed from the fittings at the appropiate end. ( the other end was left attached to the FP heat exchanger, making for an easy reversal if needed.) New hoses were run to the outside of the FP casing, by which I had to drill 3 new holes in its base. The new heat exchanger was mounted to a cross member that sits behind the FP and in front of the main engine. The hoses were hooked up and the generator started. I'm pleased to report that the generator now runs for some hours and the water from the exhaust is no longer very hot but is warm to touch and the unit no longer shuts down itself due to over heating. 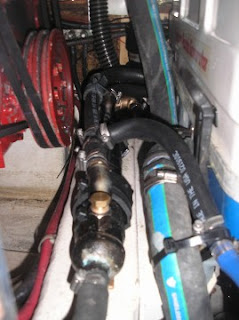 Some things to consider. I knew the FP heat exchanger was in poor location and if I ever get it out, will probably put removable end caps on it and mount it outside the sound proof casing just like the new one.
The new one works great, but in the next time the boat is laid up, I might also remove, (and now very easy to do so) and have it modified with removable end caps of a screw off nature.
I'll carry more heat exchangers as spares.
I'll carry a propane torch, easy flow rods, and silfos rods. Solder and soldering iron I already carry.
I will always consider the cost of an airfare to be part of my spares, to procure the item I neglected to have the foresight to carry.
As a bonus, the FP now shuts down from the control panel quickly, and I may remove the second solenoid modification, detailed in a prior blog, because it is not needed and the whole issue of not shutting down may have been due to a protective system in the control module. I'll give it another couple of months yet to see if all is well with the shut down. How do your heat exchangers look? Can you clean them easily? Happy cruising!
Posted by Paul at 5:57 PM