We have had two autopilots on our Hylas44, but at a couple of times, both have let us down. We were not surprised with our original Robertson as it is very old (1985), but the Furuno has had it's moment too. That left us hand steering through a storm and 72 hrs out from New Zealand. There was just my wife and I. So, we decided after the last "play up" by the Furuno, (going from NZ to Fiji), we would purchase an independent, standalone, autopilot. This is what we installed, a  CPT autopilot, in which information can be found here along with pictures of other types of installations. 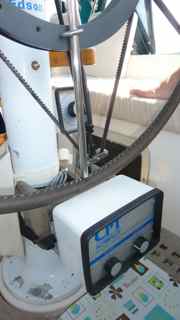 We received the package in Fiji after my wife returned to NZ to pick this and other items up. This order was made possible after many phone calls from both ourselves (at sea and using a satellite phone) and our "go between" in NZ. We received the templates via email while at sea (NZ to Fiji); we measured and sent the details back, and the unit was being prepared for export before we even arrived in Fiji. With all the issues that go with ordering an item like this at sea (measurements have to be taken so the correct items can be shipped), we were impressed with the courteous service, the understanding of our situation, and prompt delivery to NZ. We had a limited time frame in which to pick this up from NZ, while my wife was there, and hence the ordering while at sea. All this could have been easier for us if we were ordering while dockside.
We installed following the instruction booklet. We did this dockside and not while at sea. It was straight forward, but you needed a few tools to install; Screw driver, hacksaw verses dremmel, socket set, spanners.
The unit worked very well around Fiji's calm water's. We did not install the belt tensioner as this  was said to be optional. However, in going from Fiji to Vanuatu, the belt would slip and we determined that the tensioner would be needed to prevent this. This happened because we were in bigger seas and the unit had to work a lot harder. Upon reaching Vanuatu, I installed the belt tensioner. 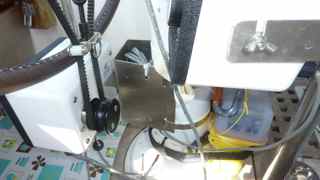 You can see the tensioner mounted on the belt in the picture to the right and above. This proved very satisfactory and did the job well. In sailing from Vanuatu to Australia we tested this unit for the whole seven days it took. At times we had 5 meter swells, beam on, which pushed the boat around a little. We even had to slow the boat down from the 8.5kts-9kts to make the passage a little more comfortable, and yet the CPT autopilot handled these conditions very well. The only time we had to hand steer was when a squall came through at night with 35kt winds and we weren't sufficiently reefed. After reducing sail, the boat went back on autopilot for the rest of the journey with no other issues.
The cost was about $1800 plus some extras and freight. You can get more detail from their web site (linked above) and emailing Jeff. It's a small company, and the service was excellent.
Of note, the specs say the unit uses 0.3 amps, and compared to the Furuno autopilot, which is rated at 3-15 amps, we found this a considerable saving of power usage which we noticed on our battery monitors.
As an aside, we feel the Furuno issue is more to do with the Hydraulic Linear Drive than the Furuno itself. We will investigate this next year. The boat is now in storage till next years cruising season. All projects have been put off till March of next year. (2012)
Posted by Paul at 7:34 PM