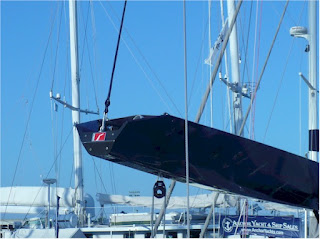 There is a mainsail on that boom even though you would think it was a bare boom until you see the head at the front end. It is not a furling boom, the main sail is simply flaked, with the help of lazy jacks. Typically you would see a lot of sail sitting on top of the boom plus a stack of battcars at the luff.

The combination of Halls gull wing composite boom and Harkens Switch T track which reduces the height of the mainsail cars, makes for a very clean look on the Shipman 65.
The Switch T Track looks like a railway switching system. The battcars alternate fall down the portside then the starboard side helping the sail flake itself and lower stack height. 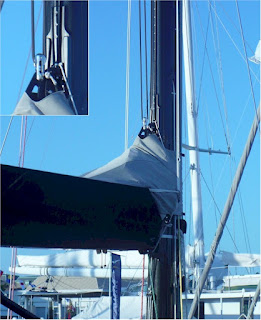 In the picture of the forward end of the boom you can see the Switch T Track just above the mainsail cover. You can see lazy jacks pulled forward in the picture above. Lazy jacks work well with Antals low friction rings

For a review of other mainsail furling and flaking systems follow this link.
And here's a closeup from Harken of their switch T Track system

Switch T Track system for reducing stack height on large yachts. Battcars make mainsail handling much easier especially with full-length battens.
When a full length battened main coupled with Battcars is lowered the sail flakes on alternate sides of the boom. This makes for a very neatly flakes mainsail. The problem however is the combined height of all the cars stacked one on top of the other.
With the switch t track system cars are alternately pushed to one side of the boom or the other to lower the stack height.
Additional Resources
Harken battcar switch track brochure


Hmmm, maybe I shouldn't have got that roller  furling boom after  all.
Posted by Paul at 9:51 PM