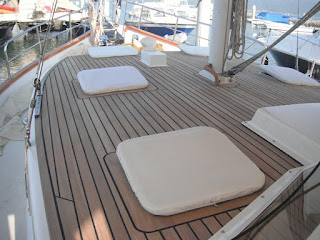 sv Sobraon spent a few weeks re-caulking their teak deck. Here's how they did it
The caulking on the cabin top deck has significantly deteriorated.  The deck was installed just prior to when we purchased the boat but from a very early point we noticed that the Sikaflex caulking was drying, cracking and coming away from the edges.  It had reached a point where it was literally falling out of the channels in the teak.  If we didn't remove it and re-caulk we may develop deck leaks especially with the coming wet season.

The caulking was Sikaflex. It dried and failed after only a few years.

The caulking was removed by hand. Most of it just pulled straight out with very little residual caulking left in the grove. It obviously was not providing any sort of water seal.

It was originally applied with a primer and break out tape, however, it came away very easilya


The grooves were then cleaned with a modified screwdriver.  Scraping it through the groove removed any caulking that was still holding on to the teak.  It also could be turned to clean on the bottom of the channels. ( Piere on SV 'Tea' gave me his version of the tool made from an old file.  It is a little sharper than the screwdriver and can be used more like a hand plane to clean the bottom of the groove.)

The screwdriver made the job of cleaning out any caulking residue easy.
With the old caulking removed the deck was lightly sanded with 60 grit to even out any major imperfections and smooth it to make it easier for the tape to stick down.

The deck was only lightly sanded to aid the masking tape adhesion.
It will be final sanded when the caulking is complete.
Once the grooves were cleared we hand sanded the channels with 100 grit to clean the sides in preparation for the caulking primer.

The grooves were thoroughly sanded to ensure a good bond with the Deckflex.

We did the deck in small sections to make the job more manageable.

By breaking the projects into smaller chunks an area can be
cleaned, taped, primed and caulked comfortably in a day


The channels were carefully masked to minimise the spread of the deckflex MSP100 onto the teak. The tape is positioned about 1/2 mm away from the edge of the channel so as to ensure the tape doesn't protrude into the groove.


The channel was then primed with MSP 10 Deck Primer. During the refurb of the rear deck we ran out of the MSP 10 and it is not readily available in Malaysia. We spoke to Troy at Fixtech Australia. He suggested that an alternative primer is Internationals Everdure Epoxy.  We were able to get this from Singapore so the rear has been primed with Everdure.  ( It will be interesting to compare the 2 decks in a few years time.)

Primed and ready for caulking


We waited approximately 2 hrs then gunned the MSP 100 into the channel taking care to slightly overfill the groove.  After applying the bead into a channel a plastic trowel was lightly dragged over the bead to smooth the MS 100 and minimise the amount of sanding that will be required to complete the project.

We used 18 x 600ml sausages of MSP100 to complete the entire deck
After about 2 hours the tape is removed leaving clean straight lines. The taping step saves a lot of sanding and leaves the teak with crisp shar

Removing the tape. The tape leaves a crisp straight line.


After 2 hours the MSP 100 is dry on the tape but soft enough to come away cleanly.

This is the rear hatch after the tape was removed. It is now ready for final sanding

This is the rear hatch after  final sanding and the Teak Seal Colour Protector and Silver Protector have been applied.

The front and rear decks were sanded and trimmed ready for the Teak Seal Colour Protector.

The decks are now finished.
It took a little over 3 weeks to finish the decks but the improvement is considerable. We had to sand some of the teak thickness away to clean up the deck, however I hope that with proper maintenance we should lose less material now.
Posted by Paul at 9:23 PM No comments:


How to integrate an electromechanical autopilot with a windvane self-steerer
Why do it?
A sailing vessel with windvane steering has the advantage of course-keeping with minimal human effort and no expenditure of precious onboard power.  But that means you must have enough wind to propel the boat and activate the self-steering device.  The usual solution it to install an electromechanical autopilot for the time when it is necessary to turn on the 'iron genoa', or for the light air conditions when there is enough wind to move the boat but not enough to make the windvane work properly.
On VALHALLA, our 1976 Fuji 32 Ketch, wheel steering is done with an Edson worm-screwer steering system (the original Fuji copy was replaced with the real thing) and the windvane is an ancient Aires (silicon-bronze geared model) that predates the construction of the boat.  The worm-screw steering, though robust and dependable, has the disadvantage of requiring three turns lock-to-lock but the Aires windvane is powerful and quick enough to handle the helm chores under nearly all sailing conditions.  Fitting an electromechanical autopilot (Autohelm 3000) gave only marginal success for the times when the only option was to hand steer, such as during very light airs and when motoring.  Though sensitive to heading changes, the speed of the motor/belt drive was insufficient to avoid wandering across the ocean in imitation of a rum-soaked helmsman.
As an aside, light-air performance of any servo-pendulum vane can be improved through a trick I developed when the Autohelm 3000 failed on a light-air passage from Pohnpei to Guam.  I noticed that the servo rudder would respond to the windshifts, but the resistance of lines, steering system and main rudder, coupled with slow boat speed, prevented course following.  The solution was to trim the boat, engage the windvane steering clutch, and lock the steering system (lashing lines to the wheel in my case).  The servo rudder on the windvane then became the steering rudder for the boat and I could once again relax.  This arrangement worked well at wind speeds as low as one or two knots with the wind abeam or abaft the beam.
Integration is the answer
Using the sensitivity of the autopilot, with it's flux gate compass, and the power and speed of the windvane as an integrated system is the answer to a helmsman's prayer.  Virtually any windvane, commercial or home built, can benefit from this approach.  It is only necessary to connect the autopilot output to the windvane input, but that's where your inventive nature is required.  Following are two solutions we've used on VALHALLA.

The first solution was based on the Autohelm 3000 motor unit .  As shown in Figure 1, a mount was made for the motor drive unit attached directly to the vane itself.  (In the photo the vane paddle has been removed for clarity though it is normally left connected to permit quick changeover between modes).  An aluminum plate was fabricated into an attaching bracket to allow the shaft of the motor to be parallel with the vane axle.  A collar over the motor shaft, welded to a rod and coupled to the vane through a fishing net clip and eyebolt, translates the rotation of the motor into a sideways movement of the vane.

Figure 1   Autohelm 3000  installation
Changing modes from windvane to autopilot is simple.  With the windvane in a neutral position (vertical in this case), the autopilot arm is rotated to align the fishing net clip with the eyebolt on the vane and the clip is snapped over the eyebolt.  Engaging the automatic mode on the Autohelm control box puts the autopilot in command of the windvane.

The control box, with flux-gate compass and function buttons, was mounted near the helm, as shown in Figure 2.  Connectors to the right side distribute power and input from the Autohelm wind vane accessory (which was blown away during Super Typhoon Paka in December 98).  A remote control unit attaches to the bottom of the control box and isn't shown.

Figure 2 Autohelm Control box
The upgrade
The Autohelm 3000 line of equipment is obsolete and no longer supported by the manufacturer.  Efforts to locate spare parts and components failed, though I searched the media, manufacturers, sailing websites, and the SSCA membership.  It was only a matter of time before these old units would fail and that time came during 1999 while cruising the waters and islands around the Republic of Palau.

The second solution was to replace the "Rube Goldberg" motor conversion with a tiller steering autopilot.  My first attempt was to use a Navico Tillerpilot TP-200CX and it's companion Hand Programmer CP-600.  Unfortunately, over a four month period, I experienced infant mortality failures (within two to six hours use) of two Tillerpilots and four Hand Programmers before sending the units back for a refund.
As a final solution, I installed a Raytheon-Autohelm Tiller Pilot ST1000+ and the Control Unit ST600R.  I've had completely satisfactory performance after over 50 hours of use with these units.
Connection to the windvane is simpler than my first solution. (Figure 3) The plastic fitting on the end of the Tiller Pilot pushrod was drilled slightly larger than a 1/4 inch bolt. A small metal bracket was fabricated with a 1/4-20 bolt extending through it.  This bracket was fitted to the windvane using one of the existing windvane bolts.

The Tiller Pilot is mounted on a sturdy wooden brace (Figure 4) attached to the pushpit stanchions with quick-release brackets (the same ones used with the Lifesling hard case).

Activating the Tiller Pilot and making course changes is done through function buttons on the top of the unit or from the Control Unit, located convenient to the helm. (Figure 5) Though close enough to reach over the pushpit from the helm seat, it doesn't permit course changes while seeking shelter under the dodger or from below, which is possible with the Autopilot Control Unit.  Both the Navico and Raytheon-Autohelm tiller pilots are designed to be mounted 90 degrees to the axis of the boat, to permit tiller steering.  Using the units in approximate alignment with the axis of the boat causes the boat heading in the display of the Tiller Pilot and the remote controllers to be in error by 90 degrees.  A bonus feature I discovered about the Raytheon-Autohelm units was the ability to adjust the display to any desired heading, unlike the Navico unit which only permitted a plus or minus ten degree adjustment.

Figure 5  Autopilot Control Unit
Other vanes
The Monitor Windvane is a servo pendulum vane similar to the Aires and is easily integrated as I have done on VALHALLA.  I previously integrated a tillerpilot with the Auto-Helm windvane (not to be confused with the Autohelm brand), which is an auxiliary rudder/trimtab type of self-steering system.  It's vane is similar in motion to that of the Aires and Monitor - rotating about a horizontal, or nearly so, axle.  Other vanes, such as the Saye's Rig, using a pendulum trimtab on the main rudder, rotate about a vertical axis but can be integrated easily with a mounting lever.  Whatever the brand,  Windhunter, Windpilot, Fleming, Cape Horn, Sailomat or those previously mentioned, the integration of an electromechanical autopilot with the windvane gives the best of both worlds.