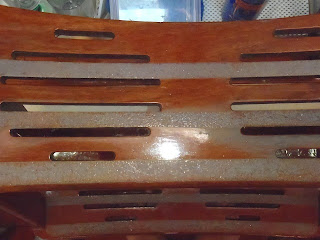 Our companion way stairs are wooden with a polyurethane coating and some non skid tape on to prevent the "sliding foot".
Last time I replaced the non skid tape, I removed all the tape by sanding and re polyurethane-ing the steps.
This time, I replaced without having to sand the remaining sticky surface off. 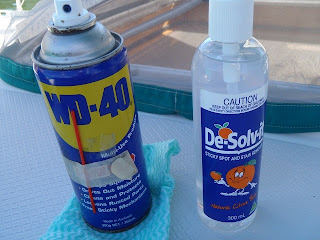 I removed the worn out strips of non skid tape and was left a sticky residue on the polyurethane from the tape. I first reached for De-Solv-It which has been good in the past, removing sticky residue from various tapes etc. This time around, it would not budge the sticky residue. So I reached for the WD40 which I have used to remove sticky stuff off my Gelcoat deck. Once again, WD40 removed that sticky residue without any hard rubbing.
So far, I can say it is good for removing sticky residue on both Gelcoat and polyurethane surfaces. No detrimental effects. Give it a try sometime and if you try a new surface, please report back here in comments, to tell us as to it's success.
The tape for us didn't come in the width we needed so we used an old pair of scissors to cut the tape to the correct width. The grit will damage a good pair of scissors!
We use a clear tape so the urethane shows through. I think it looks nicer than the black tapes sometimes available.