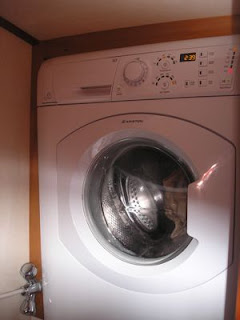 One thing lead to another with these boat projects. This blog is about linking three boat projects, and each one is worthy of it's own post. But for now, I'll give a precise of the  events.
Firstly, in the shower cubicle of the boat, I had a cupboard with a large 12 gallon hot water tank that I wanted to replace with a washing machine. So I set about removing the HW tank and then installing the washing machine. Because the doors were only 18 inches wide, the WM had to be disassembled to get through the door and then reassembled in-situ. This may become another blog at some time.
Now, because I had removed the HW tank and our only method of heating water, I then set about installing a califont, or probably better known as a "heat as you go, propane water heating unit". This was a unit sold in New Zealand, but I have seen similar units sold in Camping World in the USA. The igniter is powered by two "D" size batteries, and is small enough to install in boats and RV's. 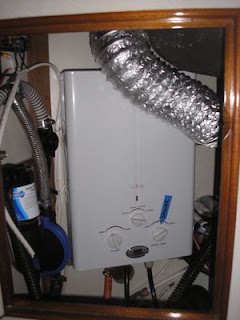 I installed the unit under the aft vanity unit on a bulkhead. I have a means of varying the temperature output and have placed some blue masking tape for the shower temperature so that we don't need to use the mixer tap to get the temperature right. The ducting is 4 feet in length and vents to the bilge. Heat at the end of the 4 foot ducting is almost nil, and one can hold your hand over it easily. I saw many units installed on other boats with out the ducting to outside, and as others have said, "it's no worse than running the stove". Propane and co2 monitors are a safety measure. Now we have hot water on tap with no need to run the generator to supply power to the old HW tank.
Finally, when installing the propane califont, I had to install a propane hose to the unit. Initially, I "Teed" into the existing propane line with the one propane cut off switch to be used to supply both the califont and the stove. This however proved to be less than satisfactory, because the califont would remove some of the gas from the stove line while it was in use. This then made igniting the stove burners, a little more time consuming as we had to wait for the gas to flow back through the line to the stove.
The solution was to use another solenoid and regulator for the new califont and "Tee" in both solenoid/regulators to that "Tee". Each solenoid has it's own on/off switch.
We also plumbed a hot water line to the aft of the boat so that we can have hot showers on the aft deck. We also think we will use less propane, than heating a kettle of hot water on the stove to do the dishes. I'll comment on that as data comes to hand.
The "T" also allows us to carry a spare propane tank to swap to when running out on the tank in use.
Posted by Paul at 3:47 PM 5 comments: 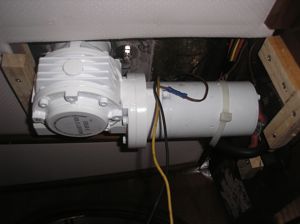 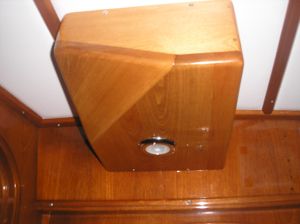 The cover box was made from Rimu, and while not matching the Cherry wood interior was close. We will have a Cherry wood one made when we can easily source the wood. You will note the angle at one of the corners on the cover box. This was placed on the cover to allow the door to the head, to swing from it's usual locked open position to the closed position. You can just see the opening door surround, to the left of the cover box. The light was placed and some strips of wood secured to the ceiling to give the cover something to screw to. For my wife and I, it is not a head banger and is no lower than the tops of the door openings. The Electric winch is a joy!
Posted by Paul at 3:30 PM No comments: