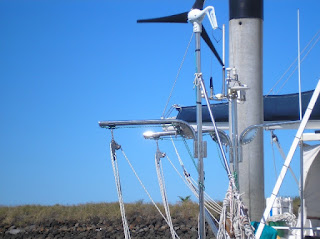 My davits which hold my dingy up are well built and swivel off from two poles at the back of the boat. Even with the gusset on the davit, I feel there are times where perhaps I overload the davits. Quite often I throw extra stuff into the dingy once secured up, as a means of quick storage. Once, I had one of the davits straightened as it had bent a few degrees, near where it joins the vertical post/pole
So I decided to add some extra support to help with the load.
The idea was to use two bolt hose clamps for the poles. From these clamps, by which a cable is secured around the bolt on the clamp, and then run with a tensioner (turnbuckle) out to the end of the davit. 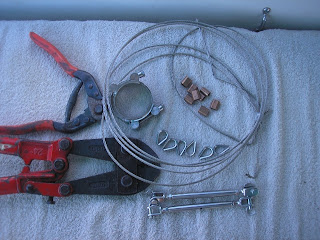 I purchased the cable, swages, turnbuckles, and hose clamps, and cable thimbles.
Assembly only took 2 hours. The swageing was made easy with the big heavy swageing tool that looks like bolt cutters. Turnbuckles were assembled with the wire to give tension  to the support wire once installed.
Finally the copper swages were rapped in a self amalgamating  tape. 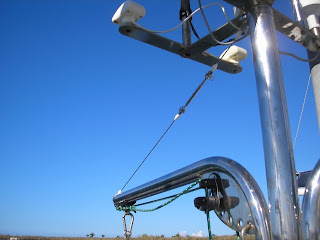 To the left is one of the cables installed. The hose clamp on the vertical pole can hardly be seen, but the top piece of wire goes around the bolt of the hose clamp as it's mounting point.
The whole job took less than 2 hours, and I'm confident it will give the extra support I desire.
Posted by Paul at 3:54 AM No comments: