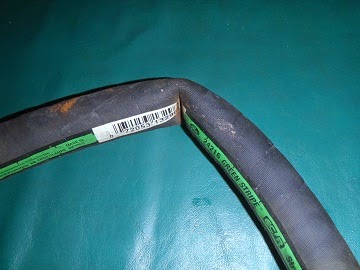 I've been cruising for a while now, and sometimes you can not get proper boat bits in the more remote parts of the world.
Recently I replaced a raw water hose which had a steel spiral wound "spring" in the core of the water hose, which gave the hose "anti kinking properties" when bent around corners.
This hose however corroded at the ends and the hose started to leak at the ends.
I replaced it with this hose shown to the left. Good quality radiator hose without the wire. When I installed the hose, it took the radius I imposed on it just fine. However after some months of running the engine, I discovered the hose kinked like that shown to the left. 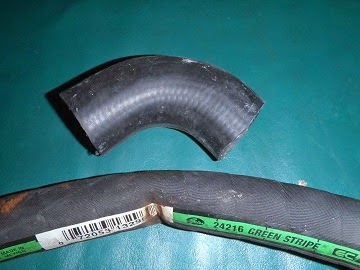 I had no new hose other than the same type to install and lamented having not purchased the spiral wire bound hose to replace the original. I also didn't have a 25mm elbow to replace the kink with, BUT did have 38mm radiator hose pieces. I used one of these pieces to make the bend. The kinked hose was cut at the kink and the ends push fitted into the elbow. 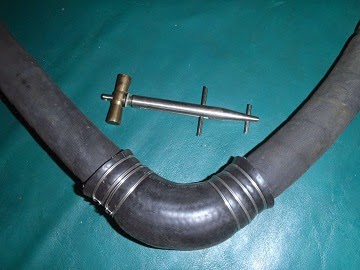 Finally I used the tool shown to the left (which an explanation of how to use can be found here).
The hose has been installed for a month now, and is both water tight and kink free. This will do until I can purchase the original type of hose which I will carry spare lenghs for future replacement
Posted by Paul at 3:38 AM No comments: