More work to my holding tanks! I alluded to some of the benefits of using polyethylene hose for sanitation hose and you can read about it here. 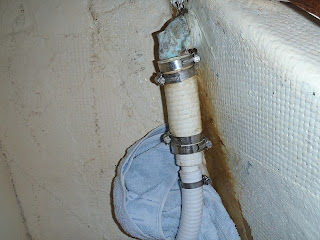 The first thing I did was remove the input hose and fitting, to the holding tank which was located on the side of the tank. Last year, I had relocated the tank air vent to the top and did a temporary block off, of the old side air vent. You can read about that here. That was located just above and to the side of this fitting seen to the left. I used a Dremel and hacksaw to make the cut of the bronze fitting. 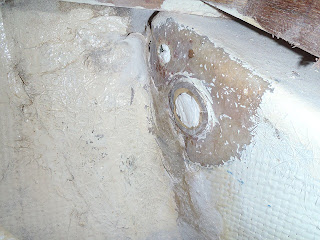 I prepped the area to get ready to epoxy glue on a cover over the old fittings. Old paint removed and each opening stuffed with toilet paper so that the glue would not full into the tank. The glue is made from two pot epoxy (slow set) with silica powder/binder added until you get the consistency of thick peanut butter. 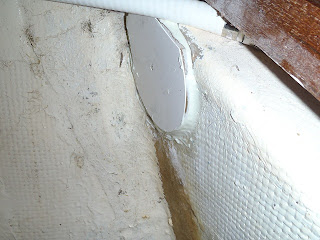 To the left is the finished fibreglass plate epoxied to the tank. This year I decided to use some off cuts of fibreglass which are cut out when the boats are removed from the molds. Typically, they are window cutouts and hatch cutouts which are then discarded. You local fibreglass boat builder will have plenty of these to give away. 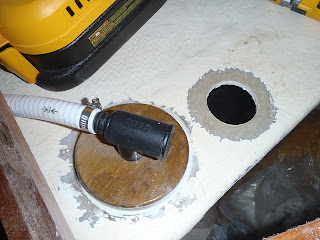 In preparation for the top fitting, I found the best location; drilled my hole for the polyethylene through hole; and then sanded the area for gluing the fibreglass plate to the tank. 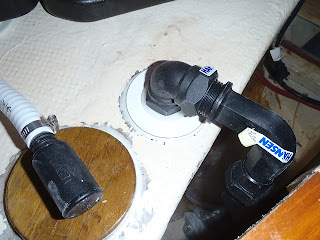 To the left is the finished fitting. You might notice that the black hose it is attached to is polyethylene pipe.
Polyethylene pipe is NOT as flexible as sanitation hose, so you may have to use elbows etc to get it to go where you want to. You can also use boiling water to get a little more curve from the pipe. 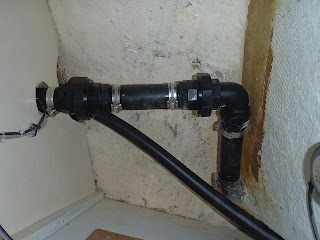 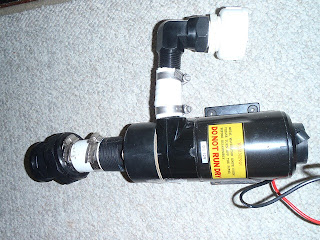 Above you can see I used barrel nuts. This makes presenting pipes up to the fittings real easy. In this case I didn't need to use them, but I had bought them with me, so decided to use them.
To the left you can see the macerator pump with barrel nut fittings at both the inlet and outlet. The outlet has a PVC type which was fitted some time ago. On the other side of the barrel nut, I have a joker valve inside the other half of the PVC barrel nut and then a valve. This is because it is pumping up hill and one day I may need to service.
I have now added a polyethylene barrel nut at the inlet side. Also, but not shown, is a threaded pipe (at the inlet side before the barrel nut), which goes to a valve, before joining up with the 38mm pipe from the toilet bowel. IF the pump needs servicing, I just
turn off the valves at either side of the pump; undo the barrel nuts (usually by hand); disconnect power; and pull the pump out. I have a few "boat towels" to mop up the small amount of fluid that will spill.
And let me say, the area smells so much better already. I might even replace the deck pump out hose ( which goes to the "Y" valve. But my wife says, that is just looking for work. Maybe if I get bored sailing?
Listening to "Just Waiting on a Friend" by the Rolling Stones.
Posted by Paul at 2:32 AM No comments: 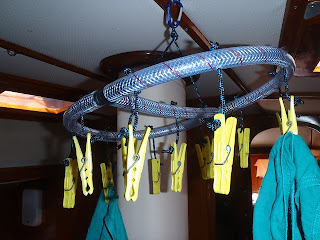 Some years ago, we were in the Pacific islands and my wife bought at a market, a round plastic hanger with multiple clothes pegs hanging off it. She used this to hang her underwear and socks from, both outside and inside the boat. Well, eventually the plastic thing broke and she lamented the loss of her "never, never holder". She says, "underwear should never be seen hanging off life lines or even a clothes line".
So I set about one evening to duplicate what she had before. I used two garden irrigation "T's and some reinforced hose to make the basic shape. I drilled through the plastic hose and placed short sections of about 3mm line through; held from slipping through, with just an overhand knot on top. Next I drilled the pegs and did a similar knot to hold the pegs. Finally I made a bridle in the middle cross piece and placed a cheap small carabiner at the center of the bridle by which to hang the contraption. 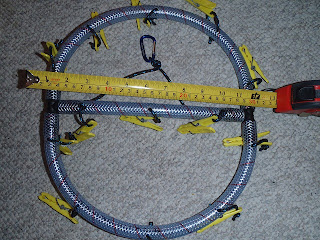