You will read below where I have in the past preferred the lever action over the allen key action. After two years of using these, I can now say I prefer the allen key model of antenna mount with a small modification. 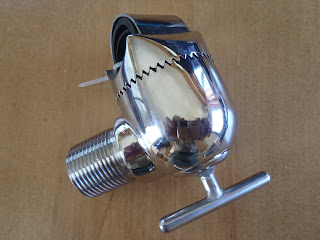 I took the allen head screw and had a small "T" welded to the head of the screw. This made adjusting easier (no longer needing an allen key) and more precise than the lever type. 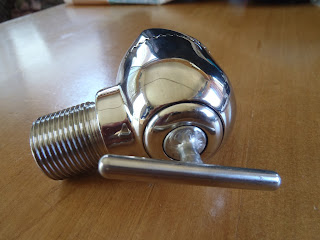 There are many ways of mounting solar panels. Here is one way to mount with a tidy way to raise and lower the panels.
In a storm north of New Zealand I lost a solar panel along with the temporary railing that I had it mounted on. I have since had the aft of the boat reworked with railing built so it looks like it was always there. Much stronger. Deciding that my previous attempts at methods to angle the solar panels were not that good, I have come up with the following idea for the rail mounted solar panels.
You will note the small vertical rail inserted half way along between stanchions. This was used to mount my actuator arm. 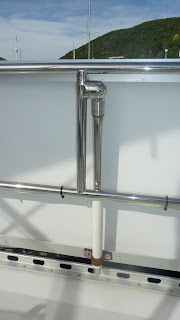 For the actuator arm, I used a stainless antenna mount and  had made a stainless tube made with a thread at one end and closed off the other. This was screwed to the antenna mount.Apply some locktite to the threads as they may have a tendency to unscrew over time. 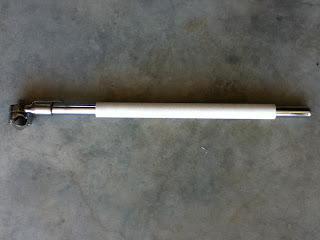 This is attached to the small vertical rail in the middle.  The solar panel  was mounted with white rail mount clamps which I had previously used to good effect. This time around though, I had to add spacers because the railing was curved to follow the lines of the boat.
At the bottom of the "solar panel actuator" the one inch stainless leg was placed in some pressure PVC pipe bought from a hardware store and this in-turn was secured to the bottom of the solar panel with leather on both sides of the pipe and the leather secured to the solar panel. I have found it necessary to apply some 4200 between the pvc pipe and leather; other wise the leather looses it's firm grip on the pvc pipe and the pipe will drop out. This allows free movement of the stainless piece of the solar panel actuator as the panel is raised and lowered. I used two different types of antenna mounts. One with allen key and the other with a turning lever. The one with the lever, I cut off short because you only need thumb tight and the lever would interfere with my lee cloths. 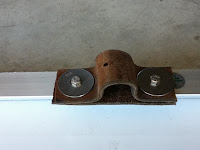 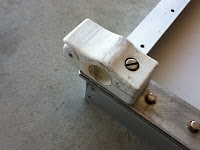 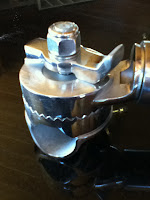 After trying both, I prefer the lever arm rather than the allen key type.
Read the mod above. The panel raises from full down to 30 degrees off the vertical. One could, if you don't have lee cloths, build the actuator arm with a curve in it near the mounted piece so that when raised it would allow the railing to not impinge on the actuator arm. I'm happy with 30 degrees off the vertical and lee cloths. 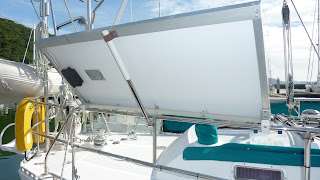 The lee cloths had small "U" shapes cut out and bound, so that the hinges and actuator arm could function. The lee cloths were secured to the railing and toe rail with cable ties. Lee cloths not shown here
Posted by Paul at 10:51 AM 2 comments: