Damper Plates, which are bolted on the flywheel, provide the damping of drive train forces exerted on the transmission by the engine and propeller.

To the left, is a picture of a typical damper plate. It looks like a clutch plate on a vehicle, but does not have the clutch effect, but is instead bolted to the flywheel. The springs that make up this damper plate provide the damping effect; but over time these springs can loosen and even break.
This brings me to where I needed to replace my damper plate.

What led me to replace the damper plate?
Drive train rattle or transmission rattle on a boat can first be noticed with engine RPM between 550rpm (idle) and around 1000rpm. It starts with a very light rattle but over some miles gradually gets worse to where you suspect something is noisy in the transmission. It can be caused by a number of factors of which is a list here;
and so it goes on, BUT the most common cause is a worn damper plate. Often, with the spring type, the springs shorten with repeated compression and then rattle inside their mounted positions. Some even break.
With my diagnosis of a worn damper plate, I set about getting the parts and equipment together to replace mine. I have a Westerbeke 82B four engine mated to a Hurth Z25 transmission. In the end, I had to go out and buy some new special tools to get the job done. This was done at Rebak Island near Langkawi Island. Not much was available in the haulout yard. Best to do this where the services are close by. 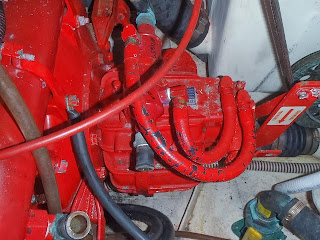 To the right, you can see my transmission with a small heat exchanger on top. The first water hose has been disconnected from it. 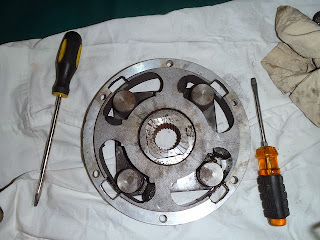 Not a spring type damper plate, but something like the one I'm about to replace with. A damper plate by Centa Corp. You can link to it here. My new damper plate was a Centaflex-DS. Centa has many types of couplers and if you choose to use one of their couplers, they will provide the correct one, once you supply details of engine and transmission.
However the damper plate did indeed need replaceing. The center rubbers were worn so where I could turn the center hub by hand; and the outer rubbers for the second stage were completely gone on one side. I don't know why this has happened, but the engine has done over 3,000 hrs. 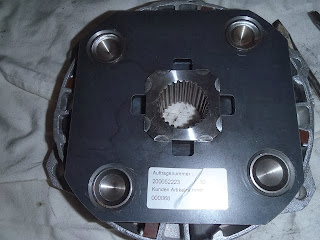 The new damper plate showing the other side, is shown to the left. 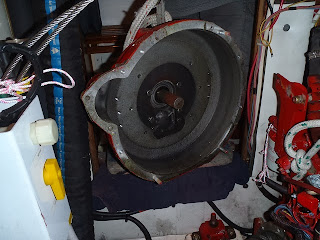 The transmission with Bell Housing just fits through an engine room doorway; now access can be gained to the damper plate at the flywheel.


The new damper plate was placed on the fly wheel and the bolts torqued. The rest was just a case of reversing the order of disassembly.
While I had this project in hand, I decided to put in one of PYI's flexible shaft couplers.  It is important to get the right coupler, and PYI will calculate which one you need after you give them details of your engine horsepower and transmission details. 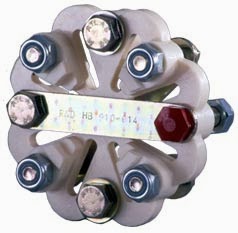 This required the shaft being moved back by about 45mm, but I thought this would not harm my current arrangement with the prop some distance from my skeg. Anyway, here is a picture of the shaft coupler in place. 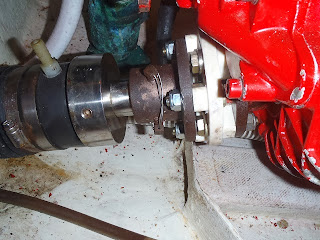 You can see here, that there is not much room from the coupler to the dripless seal. This coupler was a compromise because of the space available. I would have preferred the one recommended by Centa, but with  the dripless seal, there was not enough space.


Finally, after placeing the boat in the water, we did about 2 hours of motoring. Oh, the quiet! Wonderful!
I had to "burp" the dripless seal to remove the air, but everything went smooth. Even the engine seems to idle smoother, and I don't know if I'm imagining things, but I think I've even picked up a little more speed.
Time; 3 days to remove the transmission. There were some very tight and awkward bolts to get undone. 2.5 days to replace. Not a job for your average boat handyman. Think about getting help if you want to attempt this.