Seatalk is Raymarine's proprietary communication "language" for interconnecting Raymarine instruments. Unfortunately Raymarine keeps the technical details of Seatalk secret and so the nitty critty of the system often has to be reversed engineered if designing something to work with Ray's different seatalk buses. However, most of you out there just want a plug and play system and I can say that Raymarine has done a pretty good job of that.

Raymarine has produced four communications protocols featuring SeaTalk as the root of the protocol's name. These include:

SeaTalk/Seatalk1
Seatalk is the same as seatalk1. Ray just added the 1 after developing other more modern buses that they called seatalk2, seatalk hs and seatalk ng. Seatalk1 is ray's propriety version of nmea 0183. Seatalk1 is readily able to be converted to nmea 0183. Raymarine supply an accessory (Part #E85001) for converting Seatalk to NMEA 0183. Also, ShipModul's and Brookhouse's MUXes also convert Seatalk to NMEA 0183. Alternatively, if you have the ST60 repeater, you will find a NMEA output on the device which can connect directly to a SOB COM port.

Seatalk which is often referred to now, as seatalk1, is a multi-talker, multi-listener approach using serial data at low data rates (4.8Kbps). Compare that to nmea 0183 which is predominately a single talker, multi listener unless one uses a multiplexer.

The network used proprietary cables and connectors that were designed for the marine environment. The connectors are three pin molded and incorporate 1/8” automotive spades as mating elements.


The network could be implemented as either a simple daisy chain structure or the more robust approaches of backbone, spur or star design.

SeaTalk uses three wires, connected in parallel to all devices on the bus:
There is no master on the bus. Every device has equal rights and is allowed to talk as soon as it recognizes the bus to be idle (+12V for at least 10/4800 seconds). Low priority messages use a longer or randomly selected idle-bus-waiting-time. This allows messages from other devices with a higher priority to be transmitted first. The different waiting times of all devices make data collisions (two or more devices start talking at exactly the same moment) very rare.

Unlike the Seatalk2 and Seatalk ng communications protocols, Seatalk communications protocol does not feature termination. Any Seatalk instruments and instruments or autopilot components featuring a 1st generation Seatalk interface which does not have a Seatalk ng interface (ex. ST40/60+ Instrument Displays, ST6001, etc.) can be interfaced to one another, in any order, using standard Seatalk cable. Seatalk cables can be joined using a Seatalk Junction Block, splices, marine grade terminal strips, or R55006 Seatalk Auxiliary Junction Boxes. This method of interfacing is referred to as a Seatalk bus. The Seatalk bus will typically be powered via a Seatalk Auxiliary Junction Box or via a Seatalk power cable which has been connected to one of the Seatalk devices.

SeaTalkhs
Seatalk hs is raymarines high speed version of ethernet. It is plug and play.

By using SeaTalk hs networking, you can instantly transfer radar, chartplotter, fishfinder, thermal imaging and navigation functions. Configuring your system is a simple as determining which SeaTalk hs devices you'd like to have (chart, radar, sonar, video) and where you would like to see them.

The most basic system may consist of a C Series Widescreen or an E Series Widescreen with a DSM30, DSM300 or a radar. The components are all auto sensing, there is no complicated setup required. Simply plug them in.

Raymarine E-Series can input/output data via good old NMEA 0183, Seatalk (Ray’s proprietary improvement on 0183), Seatalk2 (sort of NMEA 2000 but seatalk ng is the bus that mimic's nmea 2000), and Seatalk HS (actually Ethernet).  Plus the E’s (and C’s) do something called data bridging where they take data from one bus and put it onto another bus.

Raymarine has network switches when working between 3 to 8 devices. They are....... 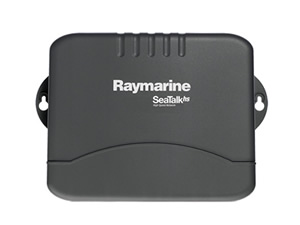 
Seatalk 2
Seatalk 2 is a five conductor system that has some N2K functionality. This network does require terminators at each end.

and here is the comparison of the different network cables below.....

Seatalk 2 whilst is not plug compatible with NMEA2000 or SeatalkNG, adapter cables are available. Raymarine A06048 is the part number for seatalk ng to seatalk2 adapter cable. (not shown).
Any data available on the SeaTalk2 network will then be available on the SeaTalk NG network. Only one connection is needed per network.
This adapter enables an existing instrument network, using the SeaTalk2 5-pin connectors, to interface with a SeaTalk NG network.*Note that this cable cannot be used to connect a SeatalkNG network to the Seatalk2 port on the back of a Raymarine E-Series display. Use cable A06061 for that purpose.

Raymarine’s current generation of ethernet cables replaces the RJ45 connector (seen to the left) with a waterproof vibration tolerant twist pin connector that is designed for the marine environment.
The new RayNet (F) to RayNet (F) network cable can be used to daisy-chain 2 adjacent RayNet devices together. It is also useful for joining two adjacent HS-5 Network Switches together on larger systems where multiple switches are necessary.

Rayamrine has a number of adapter cables which most are to adapt the older RJ45 with the newer Raynet cable. They can be seen here

An NMEA standard for the transfer of NMEA 2000 messages using an Ethernet protocol is being developed that will be called OneNet.

Seatalk ng is basically NMEA 2000 and can be connected to a NMEA 2000 network via an adapter cable.
SeaTalkng comprises a single backbone terminated with two terminators, one at each end. Spur cables connect the backbone to individual Seatalkng products.
Small diameter cable connectors are used throughout the system, to make installation easier. Cables and connectors are color-coded to reduce the likelihood of misconnection.
A wide range of different cable lengths provides flexibility and obviates the need for cutting and splicing cables.
Three-way, five-way and in-line connection pieces are available to connect cables, to
deploy Seatalkng as required.

One of the things I like with the raymarine seatalk ng is the 5 way connector blocks. Something I wish NMEA 2000 would have. NMEA 2000 also has this and be seen here.
Plan the route of the Seatalk ng backbone so that it runs as close as is practicable to the intended location of each Seatalk ng product, to keep spur lengths to a minimum.
Products connect to the backbone via spur cables. Spurs connect to the backbone via either a Seatalk ng T-Piece or a Seatalkng 5-Way Connector

Seatalk (sic) has a number of adapter cables, of which one is the seatalk ng to NMEA 2000 adapter cable. Part number A06045 for the female cable and A06046 for the male cable.
You can see a range from rayamrine, of the adapter cables here.

Raymarine with Wifi and Bluetooth
This is still in it's infancy, but is now working. It can only get better from here. There iOS app has been released and can be viewed here. I wonder if it will work with an iMux instead of their e-series display WiFi?

RayControl emulates Raymarine MFD’s with touch screen interaction and a virtual slide out MFD keyboard. The slide out virtual keyboard gives you control of all MFD functions and the virtual uni-controller allows you rotate through menus and adjustments effortlessly.


Perhaps in the not to distant future an iMux will no longer be required as manufacturers integrate wifi and bluetooth into their products. I look forward to that, but in the mean time, the cheapest option for someone who has already invested heavily in existing technology is a Wifi seatalk/nmea multiplexer.
Whether you use Navionics or iNavX on your iPad, you have to get the various Seatalk output data from your instruments, GPS, AIS into a format that can be understood by either of those programs. That is exactly what you have to do to get the same information into an onboard computer. Typically, this is accomplished by a multiplexer which is spliced into the Seatalk network. Most of the data comes at a slow baud rate, but the data from an AIS is at a much faster rate. The multiplexer takes all of these data streams and sorts them out and sends them in a controlled output to the computer or if WiFi capable, to your iThing. But now, with MFD's having WiFi integrated, it takes the hassle out of setting up a WiFi multiplexer. Also, it is one less device to purchase, to get WiFi   Looking at the video, RayControl also has some high bandwidth data displayed on your iThing. I'm impressed, and wonder what the other big manufacturers will bring to the market.
One last question. Does the new WiFi enabled e-series display integrate with iNavX for the data? I'm not expecting the chart to come across, but basic nmea 0183 sentences. Perhaps a reader will let us know.