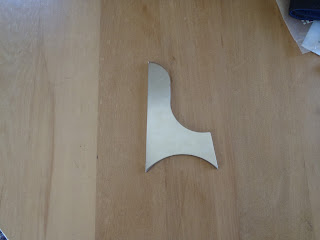 Until I get back to my boat, I thought I would throw out a challenge to you boat aficionados. A game if you like.
To the left is a piece of laser cut 6mm plate SS yet to be installed on my boat.
The challenge to my  readers is to guess what this SS piece is for and where on the boat it is located.
The SS requires two holes to be drilled in it for mounting and then it is finished.
Any reader may guess up to twice, and I will allow 5 questions from any one to help others guess as to  what and where it's for. So if you are going to ask a question, think carefully,  because you are asking on behalf of everyone. There are only 5 questions allowed. You may not ask questions related to Location or Uses. Sorry, there are no prizes. Have fun guessing. Let the game begin.
You may put your questions and guesses in the comments section below this post.

Ben Lee from Three Sheets Northwest has written a blog on why Aluminum Anodes are better than Zinc Anodes. He summerises  by saying... "Plus, aluminum weighs about half as much as zinc, helping with fuel efficiency as well as your back when pulling out your spares box. Just be aware that aluminum anodes corrode differently than zincs. Instead of the even pitted appearance of corroding zinc anodes, aluminum anodes tend to corrode in bigger chunks. Though it might look odd, the anode is working and should last even longer than your traditional zincs."
They are also meant to be more environmentally friendly and can be used in all water types.
Hop on over to the Three Sheets NorthWest site to read the whole article. Seems to make some sense to me; I would give it a try, but it would mean mixing anode types. A definite no-no! 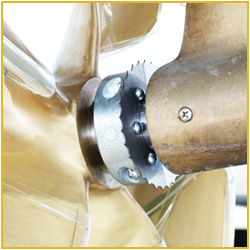 I have these zincs on my shaft and want to retain them. You can read about the line cutter anodes here.
Don’t Mix Anode Types. If you install different anode materials like zinc and aluminum, the more active anode (aluminum) will spend part of its effort protecting the less active metal (zinc). This will reduce the overall protection that you are getting. A classic mistake is adding a zinc transom anode to a Sterndrive equipped with aluminum anodes. Transom anodes are connected through the bonding system so make sure you install aluminum replacements.

And here is a nice PDF article which helps explain it more.

Email ThisBlogThis!Share to TwitterShare to FacebookShare to Pinterest
Labels: zinc 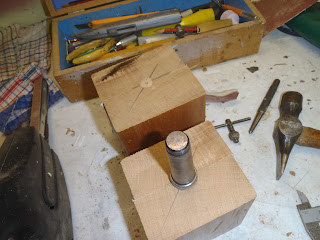 In deciding to make my own shroud anti chafe covers, I came up with an idea for the end caps. These are usually split so they can be applied to the end caps of the tube and sit firmly against the wire rigging. The tube, (in my case I am using 32mm pressure PVC pipe), is slid over the shroud (the shroud has to be undone from the turnbuckle). Then, once the shroud is re-tensioned, the end caps are applied and secured in place with a small screw to each side.
I made mine from a hard wood called Rimu. The caps have a 10mm hole in the center to match my wire rigging.
The problem with making end caps and then splitting them, is that if using a saw, the dimension for the end cap to fit in the pipe is changed by the thickness of the saw. Also it can be very difficult to get a straight cut down the center of a small round piece of "dowel".
Here's how I over came that problem. First I glued two pieces of wood together using a "light" type of PVA glue WITH a piece of paper between the two pieces of wood. This was set up over night with the two pieces under pressure in a press. You could try a heavy weight; I'm sure that would also work.
The ends of the wood were sawn square and on a drill press, the 10mm hole was drilled down the center.
A piece of dowel was tapered slightly and driven down into the 10mm hole at one end. This was cut and sanded square with the end surface, and a center bit was used to place a start "dimple" into the dowel.
Then the spindle that supports the wood was driven into the end, using the center of the dowel to help in the location. This was then placed in the lathe and a running center applied to the outboard end. You can see in the picture to the right, how the two halves are glued together, with the paper between. 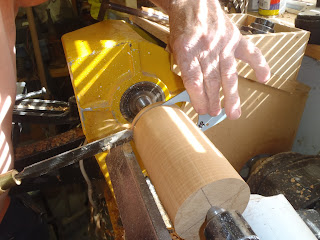 These were then turned down to the required size and shape. On mine, I placed 40mm of length, to go inside the pipe, and a mushroom type of head for the outside.
On the picture to the left, you can see in my left hand, a preformed gauge to give me the required dimension. 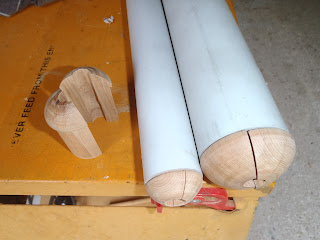 Finally, you can see the finished products to the right, in both a 32mm and a 50mm pipe, and one sitting outside the pipe, in it's two halves.
How did I get it into the two halves?
Once finished turning and finale sanding, take the  cap and place it on it's end. Then get a wide and sharp chisel. Place this at the interface of the two pieces of wood, right on the edge of the paper. Usually, supporting the wooden cap and chisel with one hand, and giving the chisel a knock with the other hand was enough to split the two halves along where the paper is glued. Some times I had to use a wooden mallet and give a little more of a knock.
Then when separated, sand the paper off on a belt sander.
These wooden end caps will have a couple of coats of epoxy "applied and dried" to them, before fitting. This will give the wood some protection from the elements and give a longer life. If you find one of your ends caps is a little smaller in the fit to the pipe than you would like, you could probably take up some of the extra slack with another coat of epoxy.
I'm using 32mm for the shroud anti chafe and the bigger 50mm for a back stay HF antenna stand off project still to be completed. The final of these two projects will be published in a later blog.

I would like to thank Paul Gooch for his expert knowledge and use of his equipment in the making of these wooden caps.